JAMES ROLLINS is the New York Times bestselling author of international thrillers, translated into more than forty languages.  His Sigma series has been lauded as one of the “top crowd pleasers” (New York Times) and one of the “hottest summer reads” (People Magazine). In each novel, acclaimed for its originality, Rollins unveils unseen worlds, scientific breakthroughs, and historical secrets–and he does it all at breakneck speed and with stunning insight. James Rollins decided to become a writer as a boy immersed in the scientific adventures of Doc Savage, the wonders of Jules Verne and H.G. Wells, and pulps such as The Shadow, The Spider, and The Avenger. He honed his storytelling skills early, spinning elaborate tales that were often at the heart of pranks played on his brothers and sisters.

Although his talent emerged and grew, writing was not James’ original profession. Before he would set heroes and villains on harrowing adventures, he embarked on a career in veterinary medicine, graduating from the University of Missouri and establishing a successful veterinary. This hands-on knowledge of medicine and science helps shape the research and scientific speculation that set James Rollins books apart.

The exotic locales of James Rollins novels have emerged as a hybrid between imagination, research, and James’ extensive travels throughout the United States and Europe, as well as New Zealand, the South Pacific, China, Southeast Asia, Africa, Australia, and South America. Recent travel includes book tours and stops across the country and several European nations to meet readers and give talks, seminars, and media interviews.

In recent years, much of James’ travel has involved meeting readers in small and large groups, at writing and fan conferences, and even aboard seagoing “seminars.” James’ mentoring temperament and coaching skills have made him a sought-out writing instructor and guest speaker for workshops, symposia, conventions, and other forums throughout the country. He is among the core faculty of the annual Maui Writer’s Conference and Retreat.

James Rollins is the author of seven thrillers in the bestselling Sigma Force series (Sandstorm, Map of Bones, Black Order, The Judas Strain, The Last Oracle, The Doomsday Key, and The Devil Colony); six individual adventure thrillers; the blockbuster movie novelization, Indiana Jones and the Kingdom of the Crystal Skull; and the Jake Ransom middle grade series (Jake Ransom and the Skull King’s Shadow, Jake Ransom and the Howling Sphinx, and more coming in 2013). The eighth Sigma Force adventure, Bloodline, is coming in Summer 2012.

In 2005, James joined other luminaries in the genre to create the International Thriller Writers, Inc. ITW recognizes and promotes the thriller genre, provides opportunities for mentoring, education, and collegiality among authors and industry professionals, and grants awards for excellence in thriller writing. James is currently the Co-President of ITW, serving alongside Steve Berry. (From Author’s Bio)

Rebecca Cantrell’s Hannah Vogel mystery/thriller novels have won the Bruce Alexander and Macavity awards and been nominated for the Barry and RT Reviewers Choice awards; her critically-acclaimed cell phone novel, iDrakula, was nominated for the APPY award and listed on Booklist’s Top 10 Horror Fiction for Youth. She and her husband and son just left Hawaii’s sunny shores for adventures in Berlin. Find Rebecca Cantrell on Facebook, Twitter, and at www.rebeccacantrell.com.

Story behind the stories…

A few years ago Rebecca Cantrell quit her job, sold her house, and moved to Hawaii to write a novel because, at seven, she decided that she would be a writer. She writes the Hannah Vogel mystery series set in Berlin in the 1930s, including A Trace of Smoke, A Night of Long Knives, A Game of Lies, and A City of Broken Glass.

She also writes the Order of the Sanguines series with New York Times bestselling thriller author James Rollins. The first in the series, The Blood Gospel, will appear in January 2013.

A faded pink triangle pasted on the wall of Dachau Concentration Camp and time in Berlin, Germany in the 1980s inspired the Hannah Vogel series. Fluent in German, she received her high school diploma from the John F. Kennedy Schule in Berlin and studied at the Freie Universität in Berlin and the Georg August Universität in Göttingen before graduating from Carnegie Mellon University.

When she visited Berlin in the summer of 2006, she was astounded to discover that many locations in her novel have been rebuilt and reopened in the last few years, including the gay bar El Dorado and the Mosse House publishing house.

Her short stories have appeared in the Missing and First Thrills anthologies.

Her screenplays The Humanitarian and A Taste for Blood were finalists at Shriekfest: The Los Angeles Horror/Sci-fi Film Festival.

As of this writing, she and her family just moved to Berlin to spend more time in Hannah’s world. (From Authors Bio) 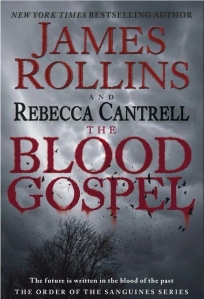 When a devastating earthquake in Masada, Israel, reveals a tomb buried in the
heart of the mountain, a trio of investigators – Sergeant Jordan Stone, a
military forensic expert; Father Rhun Korza, a Vatican priest; and Dr Erin
Granger, a brilliant archaeologist – are sent to explore the macabre discovery,
a subterranean temple holding the crucified body of a mummified
girl.

But a brutal attack at the site sets the three on the run,
thrusting them in to a race to recover what was once preserved in the tomb’s
sarcophagus: a book rumoured to have been written by Christ’s own hand, a tome
that is said to hold the secrets to His divinity. But the enemy who hounds them
is like no other, a force of ancient evil directed by a leader of impossible
ambitions and incalculable cunning.

From crumbling tombs to
splendorous churches, Erin and her two companions must confront a past that
traces back thousands of years, to a time when ungodly beasts hunted the dark
spaces of the world, to a moment in history when Christ made a miraculous offer,
a pact of salvation for those who were damned for eternity.

Here is a
novel that is explosive in its revelation of a secret history. Why do Catholic
priests wear pectoral crosses? Why are they sworn to celibacy? And why does
Catholicism insist that the consecration of wine during Mass results in its
transformation to Christ’s own blood? The answers go back to a secret sect
within the Vatican, one whispered as rumour but whose very existence was painted
for all to see by Rembrandt himself, a shadowy order known simply as the
Sanguines.

I’m not a reader or lover of Vampire novels, but i am a fan of James Rollins fast paced action packed adventures. They are the high-octane fun between my historical fiction reads. So it was a foregone conclusion that i would be buying this book.

Would it live up to his other books? would the collaboration work? Is it a good story?

The book has the high-octane of Rollins other work, but tempered by a deeper plot and a more controversial topic (religion…Yikes). I personally think there is a clear female touch to the story, a real female understanding to some of the more controversial points in the plot, and to the characters. If this series keeps going at this high level… well it reminds me of the Fantasy series by Raymond Feist and Janny Wurts (Empire series), While both are good authors on their own, they came together and created one of the all time great fantasy series, and IMHO have never managed to write so well again on their own. This collaboration has the same feeling to it, the same depth , quality and … completeness.

Over the last 9 years since the Da Vinci code was released to such resounding hype there have been so many books released with the strap line “The next Dan Brown” or ” The new Da Vinci code”…and its not even a good book. This book deserves though to be followed by new lines… “The new Blood Gospel” …authors “The new Rollins and Cantrell”.

The Sanguines are a great take on the Vampire plot line, and the link to key figures and times in history is done with style and borders all sensitive areas of the church without offending.. well at least i wasnt offended. Some truly dramatic scenery and action sequences that just blow your mind.

Our heroes, The Knight, the learned woman and the warrior, are all real, they are all humanised, and dont have to achieve anything super human to keep this story and plot going. This is a major win for me. (and yes i know i just called the vampire human.. but the writing humanizes him. and despite his extra strength etc, it’s all within the bounds of believable. (or maybe ive seen too much true blood)