Raymond E Feist: Jimmy and the Crawler (The fourth book in the Riftwar : Legacy series)

Raymond Feist was born and raised in Southern California. He was educated at the University of California, San Diego, where he graduated with honours in Communication Arts. He is the author of numerous worldwide fantasy bestsellers including the groundbreaking classic ‘Riftwar Saga’ and has continued his phenomenal success with his new Riftwar series including bestsellers ‘Krondor:The Betrayal’ and ‘Krondor:The Assassins’.

Jimmy and the Crawler (2013)
(The fourth book in the Riftwar : Legacy series) 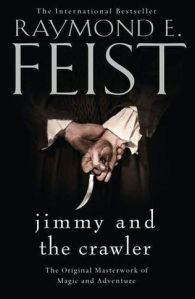 A fantastic new novella from the master of magic and adventure. Best selling author Raymond E. Feist returns to the city of Krondor and one of his most loved characters, Jimmy the Hand.

The Crawler: a name whispered in fear…

In the crime-ridden back alleys of Krondor a rival gang has sprung up to threaten the Upright Man’s Mockers. Does the Crawler control the rival gang? Where does his power come from? And does it threaten the peace of the Kingdom?

James, personal squire to Prince Arutha of Krondor, but in the underworld known as the thief and trickster Jimmy the Hand, must travel to Kesh in disguise. There, working with William, lieutenant of the prince’s household guard and son of the magician Pug, and Jazhara, niece to the Keshian lord Hazara-Khan, he must attempt to unmask the mysterious Crawler and rid Krondor of his influence.

This series is and has always been the weakest of the Krondor based books.

I loved it; There is and has always been something about Jimmy the Hand that worked for me. He is the one of those great characters in fantasy fiction. Yes he is too damn good, too fast, too lucky, too heroic etc. But he is fun. He is the type of escapism character we all want to be, and takes you so far away from the hum drum real world.

The book slots in between many of the other tales, and i found myself wracking my memory for which not to which person or place fitted in which book. This annoys some but makes me want to read the other books again. (i probably will after the release of Magicians end is published.

The finest Feist series is still the Empire series:

but the most fun is:

10 books of such sweeping action, imagination and escapism that it ranks up there as one of my all time fav fantasy series.

The 2 series that Jimmy the crawler belongs too started life as script for computer games, and while the weakest of all his books, can often be some of the fun ones, a closer look at amusing character like Jimmy

So if you are a fan of Feist you don’t need me to tell you to buy this book, but if you have never read his work, it’s a fantastic little novella that shows how well the man writes, and gives you a flash of fun and adventure from one of his finest characters.
http://www.amazon.co.uk/Jimmy-Crawler-Novella-Edition-Raymond/dp/0007511280%3FSubscriptionId%3D0ACM1RC83GP83JK10M02%26tag%3Dauthordatabase%26linkCode%3Dxm2%26camp%3D2025%26creative%3D165953%26creativeASIN%3D0007511280
For the amazon reviewer detractors: £9 for a book that takes several hours to read, and leaves you thinking about for longer, that makes to re-live the great books of the series and maybe even re-read the whole series end to end. Compare that to £8 for a 90 min film at the cinema and the fact you will probably leave and forget the plot within 20 mins because the avergae film from hollywood is some mindless pointless comedy. Yet people go back and back for them without complaint, but think that the effort and time and imagination that went into a book, even a novella like this “isnt worth £9”. tell me what else you can do for £9 that lasts on its own for hours and can inspire and entertain in the same way?
Oh and the book its self, beautiful cover, a really fine satin finish to the art work.
Recommended
(Parm)

One response to “Raymond E Feist: Jimmy and the Crawler (The fourth book in the Riftwar : Legacy series)”