Michael Arnold’s interest in British history is lifelong, and childhood holidays were spent visiting castles and battlefields. He became a Sharpe junkie at the age of 13, and his particular fascination with the seventeenth century was piqued partly by the fact that his hometown Petersfield is steeped in the history of the period. Michael is the bestselling author of Traitor’s Blood and Assassin’s Reign. He is also the author of the short story Stryker and the Angels of Death.

Michael is the first historical series novelist of our time to have used the English Civil Wars as his backdrop, and, in his exclusive new sequence of Highwayman novellas, turns his attention to the period when England was a republic. 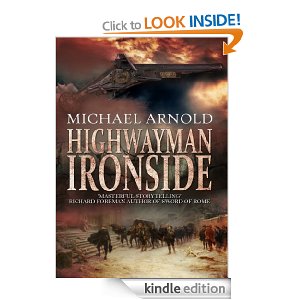 England: 1655.A nation reeling from the turmoil of bloody civil war. An island in the iron grip of Oliver Cromwell’s Protectorate.The forces of King Charles have been utterly defeated. The sovereign is dead, his supporters beaten, humiliated and scattered.But it is not just former Cavaliers who find themselves hounded by the new regime. Many of those who fought for Parliament have fallen foul of the oppressive rule of the Major-Generals.One such man is Major Samson Lyle: Roundhead, outlaw, fugitive. Forced into exile after a dispute with the ruling elite, he has returned, intent on waging war against those now in command. Skilled with pistol and blade, Lyle takes the fight onto the busy roads south of the capital, forging a formidable reputation as a notorious highwayman.

Along with his trusted young ward Bella, and Eustace Grumm, an irascible former smuggler, Lyle dodges the ever-present threat of capture to menace those against whom he has sworn revenge. But when the robbery of a powerful lawyer alerts Lyle to the imprisonment of a former comrade, the Major is plunged into a dangerous game of intrigue and deceit that may finally prove his undoing. And he must tread carefully, for Parliament have dispatched their own man to hunt the elusive outlaw.

The villainous Colonel John Maddocks is tracking Lyle’s every move, and soon he will come face to face with the Ironside Highwayman.

Review
This is a short story (before anyone complains about not getting a full book for their £1.99) It is however a blooming splendid short story. Michael Arnold writes this era better than anyone in the genre, his books reek of cordite from the guns and resound with the clash of steel and the pounding of horses hooves. This short story is no different from the Stryker series in its power and accuracy, but its characters especially his new protagonist Lyle. A man haunted and angry, but a man who if not controlled by honour at least controlled by a need for vengeance against the very people he worked for and with.
This splendid little tale is the beginning of what i hope will be a very long running series, a chance to take a hit of Michael Arnold’s skill between each and every fabulous Stryker novel.
The new one due July 4th (UK) Amazon UK link or Buy a signed copy from Goldsboro Books
Other books by Michael Arnold
Civil War Chronicles
1. Traitor’s Blood (2010)
2. Devil’s Charge (2011)
3. Hunter’s Rage (2012)
4. Assassin’s Reign (2013)