Henry Venmore-Rowland: The Sword and the Throne (20th June 2013)

Henry Venmore-Rowland was born and bred in rural Suffolk. Aside from the occasional family holiday, often to Italy, his only escape from school and village life was in the pages of historical fiction. His fascination with military and political history, the kings and battles approach, somehow got him into Oxford to read Ancient & Modern History at St. John’s College. After dedicating so much time to reading grand tales of epic wars and political intrigue, trying his hand at writing such a story was always inevitable. The Last Caesar is his first novel. He lives in Suffolk.

Buy the Hard Back from Amazon 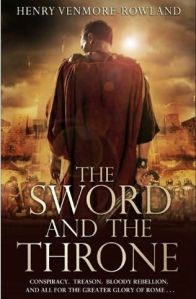 AD 69. Aulus Caecina Severus has thrown in his lot with the hedonistic Vitellius and prepares his legions for a gruelling march over the Alps.

Driven by the desire to repay the treachery of his former patron, the Emperor Galba, and to keep his rival Valens in check, Severus leads his army against barbarian rebellions and against the mountains themselves in his race to reach Italy first. With the vast Po valley almost in sight, news reaches the army that Galba has been killed in a coup, and that Otho has been declared Emperor by the Praetorians who he had bribed to murder their own emperor.

But there is no turning back for Severus, even if he wanted to. The Rhine legions want their man on the throne, and they won’t stop until they reach Rome itself. Even once Otho is defeated, the battle for supremacy between Severus and Valens is far from over. The politics of the court and the mob is the new battleground, and Severus needs the help of his wife Salonina and his freedman Totavalas in this constant game of thrones. When stories spread of a new power in the east, Severus has to decide where his real loyalty lies: to his Emperor, to his city or to himself?

Last year saw the début release of the fantastic The Last Caesar. (Review Link) That book saw the meteoric climb of Aulus Caecina Severus. Well written, well-paced and full of action. This book, book two is always a potential issue for any new author. Second books have the worry that it may not be as good or well received as the first book.

But panic not, Henry manages to weave another splendid tale, this time following Severus on his final rise and then very sudden and catastrophic decline. Henry’s best achievement is his characters, Severus is so likeable despite his obvious flaws and self-serving nature. The real brilliance of this book and the last sits in the form of Totavalas, I wish there had been more of him, and I hope that Henry will one day write his story.

I always feel uncomfortable saying the history is spot on, I just don’t have the required depth of knowledge to confirm that, but I can say it felt right, and the bits I looked up were right. But if the feel of the period is right and it can transport you to another time with its clear real characters then for me it hits the nail on the head. Chuck in the writing style, one that avoids all the not required fluffy descriptive and focuses on the plot and the people and you get a great read.

A better book then Last Caesar? Yes in my opinion it is, As it clearly shows progression in style and skill from book one, Henry is clearly someone who intends to become a name to be reckoned with in the genre. I very much want to see where he goes next.. my hope is Totavalas, but I feel Henry has something new and unique up his sleeve.

One response to “Henry Venmore-Rowland: The Sword and the Throne (20th June 2013)”