(In his own words) Born in 1975, I spent the first eighteen years of my life getting through the gauntlet of primary education. While there, I dabbled in soccer, chess, and tried to write my first novel (several times).

Out of school, I became fascinated with computers, repaired them for a brief stint, then moved to Charleston, SC and attended college. To save money, I purchased a small sailboat to live on, and nearly got myself killed bringing it down from Baltimore with a friend. 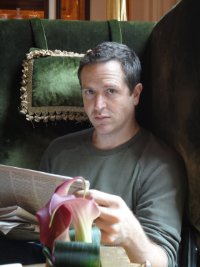 After my junior year of college, possibly out of fear of the real world, I left my safe little harbor and sailed South. I hopped around the islands for a while, went through two hurricanes, and spent the last of my cruising funds re-stepping my mast. It was time to head back to the States, where I began a career as a yacht captain.

This began an exciting phase of my life, traveling all over the East coast and Caribbean, from Barbados to Chicago. I worked on boats in New York, the Bahamas, even Canada. One of these adventures brought me together with my wife, who was able to lure me away from my vagabond ways, dropping anchor and buying a house.

Physically settled, my mind continued to roam, concocting adventures and whisking me off to fantastic places. Some of these tales seemed worth sharing, so I tapped into my love of books and decided to write them down. My first stories detail the life of a character that I’ve been mulling over for quite some time. Her name is Molly Fyde, and she draws inspiration from the awesome women in my life.

My Wool series became a sudden success in the Fall of 2011. Originally just a novelette, the demand from Amazon reviewers sent me scurrying to write more tales in this subterranean world. The resulting Omnibus has spent considerable time in the Amazon top 100, has been a #1 Bestseller in Science Fiction on Amazon, and was optioned by Ridley Scott and Steve Zaillian for a potential feature film. The story of its success has been mentioned in Entertainment Weekly, Variety, and Deadline Hollywood among many others. Random House is publishing the hardback version in the UK in January of 2013.

When I’m not writing, I like to go for hikes with my family, take a stroll on the beach, and keep up with my reading. I currently live in Jupiter, Florida with my wife Amber and our dog Bella. 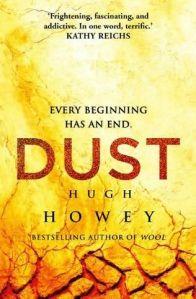 Buy for your Kindle

WOOL introduced the silo and its inhabitants.

SHIFT told the story of their making.

DUST will chronicle their undoing.

Welcome to the underground.

This series has been a revelation, I don’t think i have read a dystopian series that’s made me stop and think as much as this one, that so subtly examines the human condition, the things that drive us as people, as families, as communities. A series that looks at the what ifs of our own destruction, our own arrogance. Normally this is the sort of deeper plot scope reserved for “literary fiction” and i would avoid it like the plague.

Dust concludes this trilogy, taking us back to Silo’s 17 and 18 and with the aid of Donald in Silo 1 provides enlightenment surrounding the plan hundreds of years in the making, set in motion by the man now called Shepard.

I was left feeling on the edge of my seat through out this book, a true emotional roller coaster, and  an exhaustingly disturbing view of humanities folly, and ability to survive almost any adversity.

I’m not sure i will ever read a better written/ conceived dystopian tale.