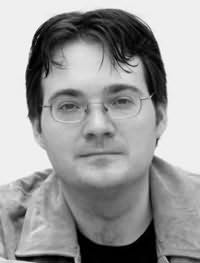 Brandon Sanderson is an American fantasy author. A Nebraska native, he currently resides in American Fork, Utah. He earned his Master’s degree in Creative Writing in 2005 from Brigham Young University, where he was on the staff of Leading Edge, a semi-professional speculative fiction magazine published by the university. He was a college roommate of Jeopardy! champion Ken Jennings. He has been nominated twice for the John W. Campbell Award.

“It’s Brandon Sanderson Jim, but not as we know it …”

“Ten years ago, Calamity came. It was a burst in the sky that gave ordinary men and women extraordinary powers. The awed public started calling them Epics.But Epics are no friend of man. With incredible gifts came the desire to rule. And to rule man you must crush his wills.Nobody fights the Epics… nobody but the Reckoners.  A shadowy group of ordinary humans, they spend their lives studying Epics, finding their weaknesses, and then assassinating them.

And David wants in. He wants Steelheart—the Epic who is said to be invincible. The Epic who killed David’s father. For years, like the Reckoners, David’s been studying, and planning—and he has something they need. Not an object, but an experience.

Review: (Guest review by Jane Carter)
Steelheart is the latest from the pen of Brandon Sanderson, an incredibly prolific author and one who’s books I am eager to read.  Previous works such as the Mistborn series and Elantris showed an imagination and creativity that has put him at the top of the fantasy tree, and those particular books are in my personal top 10.
Steelheart is a superhero novel and the start of a new series, and I believe it is fair to class it as Young Adult (YA).  I’ve scoured the publicity around this release and whilst I can find no suggestion that the publishers themselves make any suggestion of this being YA, the majority of reviewers seem to lean this way – and I agree.  Not that I see this as a problem at all as I have read many most excellent YA books, often finding the label superfluous – The Fifth Wave by Rick Yancey for example is one where I would have been happily oblivious to the YA positioning.  In this case however, finding the comments about it being YA was something of a relief, in a “ah, it makes sense now!” type way.  Not because there is anything wrong with this book – I enjoyed it – but it certainly wasn’t quite what I was expecting from Sanderson.  The intricacies and depth I expected weren’t quite there for me.  The danger for YA books is that often it can result in a watered down approach, with basic characters and fortunately that is not the case here.  To make a movie analogy, this would definitely fall into the “action” genre – it’s fast-paced and action-packed which makes it an easy read, and you could actually see it being easily transferred to the big screen.  The characters having special and unusual skills is in keeping with Sanderson’s creative ideas that made Mistborn and Elantris so exceptional and that is still apparent in Steelheart, with the bad guys having skills such as abilities to turn anything inorganic to steel (hence the title of this first book), or create elaborate illusions.   There’s no great depth to a lot of the characters – not yet anyway, there are certainly hints of more to come – but that doesn’t mean anything is missing as they are still well written and for this type of story it’s not always necessary to have great swathes of detail and back-story.  The plot is well paced and there’s no unnecessary waffle, overall a fun easy read – although I have to agree with another reviewer on the city name: “Newcago” instead of Chicago?!  Would have expected more from Brandon Sanderson – and that possibly summarises why this one didn’t totally hit the spot for me, a victim of Sanderson’s previous success in that I had such high expectations.
Other titles by this author
Elantris (2005)
The Emperor’s Soul (2012)

Short Stories
The Hope of Elantris (2007)