Raymond Khoury was born in Beirut, Lebanon in 1960. The family move to Rye, New York when fighting broke out in Lebanon in 1975. After graduating from Rye Country Day School, he returned to Lebanon to study architecture at the American University in Beirut. A few weeks after he graduated, civil war erupted and he was evacuated from Beirut. He ended up in London where he joined a small architecture practice. In an attempt to explore other career options, he earned his MBA at INSEAD in Fontainebleau, France, and joined an investment bank, which he stayed at for three years. Not satisfied with world of investment banking, he sought a more creative career, and hooked up with an banker who dabbled in the film business. Though unintended, he ended up with a career as an acclaimed screenwriter both in London and in Los Angeles.

Khoury lives in London, with his wife and two young daughters. 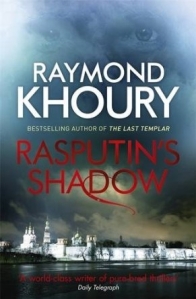 For me Raymonds books are a different sort of thriller, the journey is just that a journey, its never for me a thrill ride. Instead its a tale on an epic scale everytime with a problem that has global ramifications. In this latest take we are back with our old friends Sean Reilly and Tess Chaykin (the 4th book in this series).  There is a splendid time-slip element, taking us back to walk in the time of Rasputin, there is a fantastic continuation of the over all story arc for Sean Reilly and Tess Chaykin (this is also going to be frustrating as hell for anyone who has not read the last book).

The plot of this book is scary as hell, the concept of the technology (that i mention due to spoilers) is a terrorist nightmare, a horror that is so easy to envisage, the software and hardware exists, the science is sound, its just not been put together……or has it?

When you read how this technology could be used by a man or a government without a conscience, that’s just scary, and its that which is the true skill and power of a Raymond Khoury book, the power to provide horrifyingly realistic visions of what could be.