Author Bio (pinched from his own web site)

Following a childhood which featured a deep interest in the military rooted in my father and grandfather’s service in the two world wars, I took a degree in Military Studies at Manchester University. Working for a succession of blue chip companies over the next twenty five years, I gravitated into business systems and change project management, and I’ve worked as a freelance project manager in the UK and Europe, the USA, the Middle and Far East over the last decade.

Over the same period I’ve gradually refined my ability to write fiction, initially for my own entertainment but more recently with the serious aim of achieving my debut publication. The manuscript of Wounds of Honour eked out a precarious ten year existence on a succession of computer hard drives and memory sticks until a life changing encounter in Belfast energised me to rewrite the manuscript and seek publication. Thanks Gerry!

I’ve been married to Helen, our family’s only true adult for 25 years now, and we live in Hertfordshire with our three children. I’m a confirmed petrol head, and I spend my spare time listening to music, reading (mainly on planes going to and coming back from work) and surfing internet car reviews with a purposeful glint in my eye. 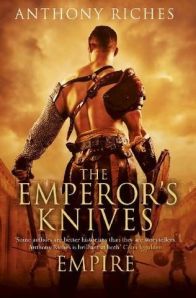 The seventh novel in Anthony Riches’ acclaimed Empire sequence brings Marcus Aquila back to Rome, hunting the men who destroyed his family.
But the revenge he craves may cost him and those around him dearly.

The young centurion’s urge to exact his own brutal justice upon the shadowy cabal of assassins who butchered his family means that he must face them on their own ground, risking his own death at their hands.
A senator, a gang boss, a praetorian officer and, deadliest of all, champion gladiator Mortiferum – the Death Bringer – lie in wait.

The knives are unsheathed, and ready for blood . . .

Book 7 the Emperors Knives  goes so much further than its predecessors, it truly is a book crammed with Machiavellian schemes, plots within plots, as our group of heroes try to help Marcus survive his honour and the machinations of the various schemers set against him within the walls of Rome. As with any Anthony Riches book the reader is left with that ever present feeling of the norns / fates, sat there spinning away the destinies of those in the book, Tony Riches joining them at the loom of life ready to snip an unsuspecting characters life thread at a moments notice either in a spectacular or blasé fashion. I shall not spoil the book by saying if anyone interesting dies…. but blood will be spilled and as writers go Tony is a bit of a swine to his men.

This book comes with a warning to readers, it is one that sucks away your time, you will sit down to read and find that the day has passed while you are marching with legions and uncovering plots. As ever i doff my cap to Tony Riches as he exceeds the plot and power of the previous book, something very very hard to keep doing, but the constant hard work and effort, the striving for more, the digging for detail in dusty research books, and the re-enactment that gives first hand experience, really pays off in the pages of this wonderful book.

I highly recommend this book, and if you have not read any of the Empire series (Why?) then please do start it now, you will not be disappointed. Seven books in and its just getting better and better.

Q: When and why did you begin writing?

A: Fiction? In the 90s. I had a great idea for a thriller (still do, it keeps getting updated in my head) but I couldn’t write it well enough to get accepted by an agent and there it lay, putting me off doing anything with Wounds of Honour from 1996 when I wrote the book to 2007 when I finally mustered the courage to send it out to agents.

Q: When did you first consider yourself a writer?
A:From the moment I started writing seriously, aged 22. It was all non-fiction then, mainly about the VietNam War and the best ways to kill tanks… I didn’t consider myself to be much of an author though!
Q: How much of the character behavior in books is based on people you know?
A: A fair bit. Mannerisms, language, sometimes a face that has character… My favourite is the brother of a friend of mine who is, shall we say, uncompromising. When threatened with the sack if he refused to take on a further journey (he was lorry driving at the time) he said ‘look at your tracker screen – see that I’ve turned round (with his load still on board) and I’m coming to beat the crap outta you, you ****’ Which, for the record, he did. He’s the source of my favourite line in any of the books… ‘and that’s why you’re sitting on your arse with a broken nose…’. Old fashioned manliness that you don’t see all that much these days.
Q: What do you think makes a good story?
A: Action, humour, proper history and the ability to keep me guessing until the end – something I strive for in my own books.
Q: What books and authors have most influenced your life as a writer?
A: I don’t know, in truth. I never consider the work of others in terms of what I can take and use,  and I very simply just like to read what I like to read. Whether any of it creeps in to my work I have no idea. I’m not the type to get analytical about my writing style, and I certainly couldn’t change it even if I had to! No degree in creative writing here, just whatever skill I was gifted by upbringing and whatever’s rubbed off on me since then. Favourite authors down the years? Adam Hall (Quiller), Iain M Banks (the Culture), Richard Morgan (Takashi Kovacs), Patrick O’Brian (Aubrey and Maturin) and Christian Cameron (Killer of Men) would probably be my top five. Although I have a huge soft spot for Len Deighton…
*WARNING SPOILER ALERT IN NEXT ANSWER*
Q: As a man known for killing his characters, who is your favorite character across the series so far?
A: No you don’t, Carter, you tried that old trick last time I interviewed for you. Let’s find out who’s safe, eh? Nobody’s safe. Nobody was more surprised than me when Rufius got his head cut off (I had no idea until the moment it was raised above the warband on a spear). Read my lips…Nobody’s. Safe. Helen (my wife) thinks she’s got Dubnus under her wing by means of forbidding me to kill him off, but when his time comes…
*WARNING SPOILER ALERT OVER *
Q: What is you favorite scene in the series?
A: That I can tell you about without spoilers? The palace scene at the end of The Eagle’s Vengeance. What a way to get your revenge!
Q: Now that the many actions of book 7 have played out in Rome, is there a new far reaching plot?
A: Yes, we’re still going all the way to AD211. There will be thirty or so books in the series, unless something happens to stop me writing them. A huge three sided civil war, the biggest battle of the second century, and a military strongman who roams the empire looking for enemies to subdue…what a canvas! And vengeance remains to be taken…
Q: If you had to busk your book on the street corner to a new audience, how would you hook those buyers in?
A: Dress in my centurion’s armour with you wearing a loin cloth as my slave! And seriously? I’d tell them that they were about to meet what I modestly consider the most entertaining collection of characters in Roman military fiction, and travel with them to every corner of the empire over thirty years of history. That alright?
Q: With the Impending Romani walk 2 would you like to tell people why they should support you and the great charities you Ben and Russ work so hard for?
A: I support Combat Stress because of the hidden psychological damage done to men like my father who volunteer to be stripped of a portion of their sanity in order that we can maintain our way of life (three generations of my family all having collected medals and mental problems in equal portions in the Boer War and World Wars 1 & 2) – and Medicins Sans Frontieres for the amazing good that they do in countries where all other agencies have either left or are unwilling to enter. Hats off to both causes.
Many thanks Tony, great interview as ever, and an excellent book.

Other books by this author