Tim Leach: The King and the Slave 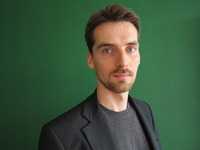 The King and the Slave

Ten years after the fall of Babylon, Cyrus’s army is on the march again. His slave Croesus, no longer a young man, accompanies him as always, as does the king’s son and heir Cambyses, who has inherited none of his father’s diplomacy or charisma and all of his vanity and violence. When the warriors of Persia are unexpectedly crushed in battle Cyrus is put to death, and Cambyses assumes the throne. Croesus, once a king himself, is called upon to guide the young man; but the young man cannot be guided, and after taking offence at an insult by an Egyptian ruler, Cambyses takes the full force of his father’s empire to Africa for bloody and brutal vengeance…

I unfortunately didn’t have the pleasure of reading The Last King of Lydia when it was first released,  but with all the glowing Reviews and the pending release of The King and The Slave it was finally time to delve into the world inside Tim Leach’s head.

I cannot start use enough superlatives to describe the experience, mainly i was stunned by the beauty of the writing in Last king, and then for King and the Slave, lost in tale of a man’s life, a life having gone through huge upheaval, a tale so well told, the detail, the feelings the pursuit of friendship, happiness, responsibility, the need to do right whilst doing wrong.  In this book there is everything from court intrigue to battles, personal hardship to personal discovery. I NEED to read this book again, i felt like i devoured it whole and want the meal again and again.

Highly recommend this book, easily in my top 5 for the year.