The ninth novel in the thrilling Empire sequence leads Centurion Marcus Aquila and the Tungrians to the battlefield that was one of Rome’s most disastrous defeats.

The Tungrians have no sooner returned to Rome than they find themselves tasked with a very different mission from their desperate exploits in Parthia. Ordered to cross the river Rhenus into barbarian Germany and capture a tribal priestess who may be the most dangerous person on the empire’s northern border, they are soon subject to the machinations of an old enemy who will stop at nothing to sabotage their plans before they have even set foot on the river’s eastern bank.

But after their Roman enemy is neutralised, they face a challenge greater still. With two of the Bructeri tribe’s greatest treasures in their hands, they must regain Roman territory by crossing the unforgiving wilderness that was the graveyard of Roman imperial strategy 200 years before. And capture by the Bructeri’s vengeful chieftain and his warband can end in only one way – a horrific sacrificial death on the tribe’s altar of blood.

Every year Anthony Riches does it to me, no matter how well i prepare myself, i sit, i open the new book and expect a death, and yet every flipping year he surprises the heck out of me and leaves me saying “No Fricking way!!” (polite version).

But as i have said for … well every book in the series, Anthony Riches books are so much more than shock factor death, blood and guts (although i love those bits). With every book the intricacy of the plot increases, the characters grow and the authors devious mind wraps the reader in knots.

As ever i have to doff my cap to the author , he is the master when it comes to bringing characters to life, not just the few main ones, but the whole cast. What it means for the reader is that you care when he kills anyone, which he loves to do. That sword of Damocles that hangs over the head of every character is made more and more poignant as the series progresses, as we become more emotionally tied to the long term cast and as that cast becomes more beaten down and worn by the violent world of ancient Rome.

In this book PTSD has its outing, and is so very well written you can feel the numbing shock through the pages, and recognise that this is something that has been a part of military life down through the ages.

Another success of this book and series is Anthony Riches ability to pull threads of the story together, threads that may have started in previous books, enemies created return to haunt the Tungrians, enmity never dies in the Roman world and as well as a carpet of dead bodies, our heroes also manage to create an epic level of highly placed enemies within the Roman Elite. This means that the author needs to be on top form with the ever twisting warp and weft of the plot.

its hard to say much more without Spoilers, so… all i can say is this book is another action packed ride through the Roman world, filled with the realistic details that make the story come to life, no one captures the nuances of military life in the Roman world in the way that Anthony Riches does.

Francesca Haig is an author and academic. Her poetry is widely published, and her novel The Fire Sermon(the first in a post-apocalyptic trilogy) will be published in February 2015 by HarperVoyager (UK) and March 2015 by Simon & Schuster (US and Canada), and is being translated into more than 20 languages. She gained her PhD from the University of Melbourne, and her principal research area is Holocaust literature. She grew up in Tasmania, and currently lives in London.

The Map of Bones (Fire Sermon 2)

The Omega resistance has been brutally attacked, its members dead or in hiding.

The Alpha Council’s plan for permanently containing the Omegas has begun.

But all is not entirely lost: the Council’s seer, The Confessor, is dead, killed by her twin’s sacrifice.

Cass is left haunted by visions of the past, while her brother Zach’s cruelty and obsession pushes her to the edge, and threatens to destroy everything she hopes for.

As the country moves closer to all-out civil war, Cass will learn that to change the future she will need to uncover the past. But nothing can prepare her for what she discovers: a deeply buried secret that raises the stakes higher than ever before.

Last year i was lucky enough to be invited to https://parmenionbooks.wordpress.com/2015/01/24/fire-sermon-francesca-haig-harper-voyager-blogger-event/ i was only recently making a move into reading Dystopian novels and this sounded different. Once again i got lucky (mainly because the lovely ladies at Voyager have amazing taste).

But as i have said before , with a new author the proof of the author skill is in book two, can they nail it twice? In the case of this series and Francesca Haig the answer is a resounding yes. Deeper, darker and more intricacy plotted that Fire Sermon (which was already blooming good), its an excellent follow up, one that will mesmerize the readers.

This isn’t a pacy plot, its not one that will quickly suck you in and race along. Its a slow burn, it draws you in and immerses you, it pulls you into the orbit of darkness that surrounds the alphas and omegas, you become addicted to the darkness. You feel the pain and the treachery, you search for the solution, you marvel at mans recurring stupidity, and all the while you pull for Cass to survive her latest trials against the council, trying to pull together the rebellion of Omegas, trying to make sense of the visions, and thwart the plans her brother is hell bent on bringing to fruition.

i really recommend this series. 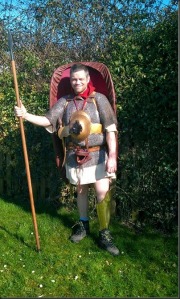 Hunting the Eagles (Eagles of Rome)

AD 14: Five long years have passed since the annihilation of three legions in the wilds of Germania. Although the bones of 15,000 soldiers now moulder in the Teutoburg Forest, not all the Romans were slain in the bloody ambush.

A CENTURION OUT FOR VENGEANCE

Demoted, battle-scarred and hell-bent on revenge, Centurion Tullus and his legionaries begin their fightback. Ranged against them is the charismatic chieftan Arminius, who is gathering thousands of hostile tribesmen, and determined to crush the Romans for a second time.

The eagle belonging to Tullus’ old legion is still in enemy hands, but as the Romans’ reprisals take their army deep into German tribal lands, he remains convinced that it is within reach. But Arminius and his warriors are perilously close. As battle begins, Tullus and his comrades know they must fight as never before – just to stay alive… 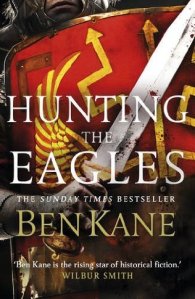 Reading a Ben Kane book is always a different experience from all the other Roman books i normally read. There seem to be so many types and styles since Rome became the bedrock of Historical Fiction, from the cut and thrust of the bloody swords and sandals to devious machinations of roman politics and criminal nefarious enterprise and rooting it out with only the tools and minds of the time. But with Ben i always feel you get something totally different. You get undiluted history, told in such an honest personal emotive way that you cannot help but be pulled into the legion, to share the toil and travails of his characters, and hope that you survive to the end.

Once again we Journey with Centurion Tullus, and his surviving men of the 18th. Its 6 years since the disaster that befell Varus in https://parmenionbooks.wordpress.com/2015/04/17/ben-kane-eagles-at-war-review/, the enmity and disgrace burns differently in each man, but in no one stronger than Tullus. The menace that is Arminius has not gone away, Rome has collected its-self and under the generalship of Germanicus is set to exact a terrible revenge. As usual the biggest obstacle in Romes way is its self. Underpaid, under appreciated, and disaffected the legions have had enough, the men want to be heard, they want to fight for Rome, but they want to be appreciated for their pains and for their lives.

Ben Kane gives us a very intimate view from multiple perspectives of the personal opinions and emotions of those involved on all sides of this story. We experience Tullus and his driving need to discard his demons, to make amends for those men he left behind, we feel the raw emotion and love of his men like Piso who cannot truly thank a superior who saved them from a horrific end, but are determined to live up to everything he needs from them. We spend time from the German perspective with Arminius and feel the burning hatred for the Roman interloper, and his constant battle to keep the disparate tribes together to combat the united force that is Rome. We get all this, down to the wet socks, aching legs, rumbling bellies and inner fear, right up to the political maneuvers and crushing of rebellion, this literally is the blood sweat and tears or Roman Fiction.

All this Ben manages  and more, and kept me riveted to the page for every word. You will honestly struggle to find any more real characters in any Roman book.

I highly recommend this and all Ben Kane’s books, if you have not read his work… why?? please go do so, all his titles are listed below.