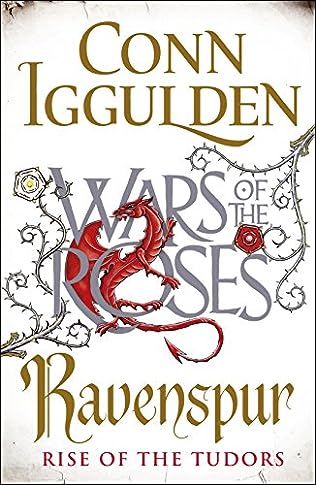 Ravenspur is the latest book in Conn Igguldens War of the Roses epic) series, a series that takes us through a hugely turbulent time for England and the monarchy. From Henry VI through to Richard III Conn Iggulden breathes life into a period of time we have all heard about, but many (inc myself) have never really explored in depth.

I have been fortunate enough to have followed Conn Iggulden since the very first book back in 2002 and even for a writer of his obvious skill and lets face it meteoric rise to the top of his genre right at the start of his career. There was always for him a drive for more, for excellence in every story, in every character, and every scene, there is no other explanation for the Genghis series and now this one. Its this that i think has brought us to this series and just how immersively absorbing it is. From the fear and uncertainty of those confined in sanctuary to the gut wrenching violence of battlefields like Towton, where the main characters are bathed in blood sweat and gore, held up only by armour and will power. Throughout it all the reader feels every emotion, every exhausting sweep of and bone crunching hit of sword or shield, and all of this wrapped up in something that educates the reader.

I always finish one of Conn’s books with a desire to know more, to delve into the life of one of the characters, or a particular aspect of the story, its this ability in his books that he brings from being an educator (he must have been a great teacher to have in the class room).

Ravenspur if anything is another step up, the book feels packed with emotion for so many characters, the weight of sorrow and loss is at times palpable, the pressing weight of depression that would sideline so many is shouldered aside for honour and duty. Men and women driven to the utter extremes both mentally and physically in their different arenas, all of this is captured so impressively and with a flow that feels effortless and yet exhausting for the reader, because  the reader has to experience each and every emotion and step.

As ever i am in awe of Conn’s writing prowess, and am left wanting more, always more.