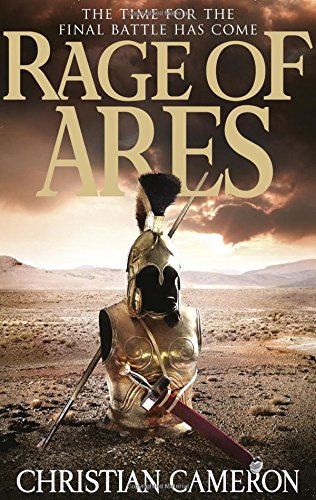 Rage of Ares  (2016)
(The sixth book in the Long War series)
Arimnestos of Plataea was one of the heroes of the Battle of Marathon, in which the heroic Greeks halted the invading Persians in their tracks, and fought in the equally celebrated naval battle at Salamis.
But even these stunning victories only served to buy the Greeks time, as the Persians gathered a new army, returning with overwhelming force to strike the final killing blow.
For the Greeks, divided and outnumbered, there was only one possible strategy: attack. And so, in the blazing summer of 479 BC, Arimnestos took up his spear one final time at the Battle of Plataea.

I could apologise in advance for any fan boy nature that may follow in the rest of this review….. but i wont, the book is just excellent, so it deserves it.

This is the sixth and (for now) final book in the Long War series. The book is about the build up to the battle at Plataea, and also near Lade, but more it is about the people of Greece and how their way of life survived by the skin of its teeth. As always Christian provides a careful educational and entertaining approach to the battle, mixing daily life and frustrations with the machinations of power and the repeated points of near disaster for the Greeks. Highlighting just how balanced the whole war was, as he often states, the war is won by the side who makes the least mistakes.

Rage of Ares is in many ways not just the culmination of the Long war but also of the character Arimenestos. Throughout the series he has grown as a character, his trials have taught him and hardened him, they have given him a depth of character and personality, shaped his prowess on the battlefield and formed his friendships and social status, provided the core of the small Plataean fleet and the backbone of its taxeis. So that in time for the last battle, he is the trusted go between for the key nations (Athens and Sparta), allowing him to provide that roving view of the battle field, to be at both battles, and to also take part and provide an intimate view of the scale and feel of the battles. It feels like a perfectly spun story arc that has finally come to fruition.

By the end of the book the emotions are pulled as taut as possible, i have to admit to having become invested in Ari as a character over the last 6 years, but i still didn’t expect that the final book would hit so hard, this i have to credit to the authors concept of writing style, making you the reader one of the audience at his family get together, it reads like a fireside tale because its told that way, a great epic tale of life and history told at the feet of the man himself. Woven into this style is the author himself, having been lucky enough to sit and chat with him you can see the nuances of his style of speech and mannerisms in the book and in Arimenestos. A book filled with battles, blood, action, politics, family, friendship, comradeship, craftsmanship, statesmanship… the list of areas used to entertain and educate is just breathtaking.

What we have in this book and this series is a powerfully emotional story told in a way that is not only imaginative and entertaining but it also manages to fully educate the reader in the politics and people of ancient Greece. It is one of the best series i have read and should not be missed, it transcends genre because i truly believe there is something for everyone in this series.