(Photo with permission from Cole Cioran)

Miles Cameron is an author, a re-enactor, an outdoors expert and a weapons specialist. He lives, works and writes in Toronto, where he lives with his family. 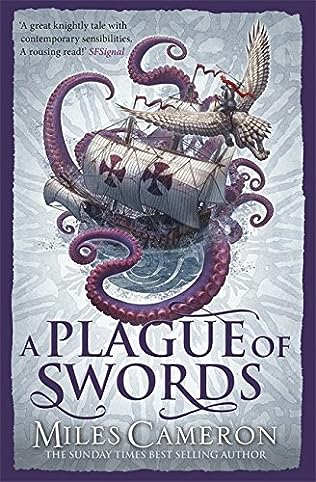 One enemy has fallen. A greater one remains.

With one army defeated in a victory that will be remembered through the ages, now the Red Knight must fight again.

For every one of his allies, there is a corresponding enemy. Spread across different lands and on sea, it will all come down to one last gamble. And to whether or not the Red Knight has guessed the foe’s true intentions.

With each throw of the dice, everything could be lost.

I find these days with Miles/ Christian Cameron books i have to start a review will full disclosure, admit to the fact that he is a friend and someone i admire for his writing, his many many skills (weapons and much much more) and intelligence (that said… if the book was bad i would honestly tell him). In fact its often that intelligence in the books that so captivates me. He is that rare author who can educate and entertain at the same time and he seems to do it effortlessly. Although i do admit to that fact that when i read the books, i can hear Christians voice, not the sound, but the nuances, and it manages to make me feel like the class dumbo, worse than when sat across the table from him… but i learn and for that… well how can i be anything but appreciative, there are also times when the character uses a turn of phrase and its like he is there in the room. I’m not sure if the characters are assuming his personality or he is assuming theirs. But ultimately it shows how involved he is in the whole writing process (just look at the photo on this blog… he is the Red Knight), and the combination makes for such a great book.

Lets get the summary out of the way, The book is excellent, it doesn’t have anything of a middle book or a pre-end of series book. It has quite simple jumped to the top of my book of the year pile (the only reason Rage of Ares isn’t already in that spot is because i have to let someone else win the book of the year .. Or Christian Would walk off with it every year… yes yes i know Miles is Christian… but its a fairly new genre for him after all.).

A Plague of Swords see’s Christian utilise every skill at his disposal, but i think most of all his analytical and intelligence officers skills. The Book goes above and beyond the average writers skill to manipulate the reader into following the narrative while the pieces of the puzzle are slowly turned, revealing only at the last moment a situation of victory or disaster. The author is often there to have his main character admit “I make mistakes”, again with the moments when i can hear Christian in the character. The Red Knight isn’t an all round super good guy, he is vain, he is arrogant, he basically has all the expected human vices and more because he is a man at the forefront of power and he revels in it, and hates it, because he cares about his people too much. Its the deeper emotions and motives of his main character where again Christian comes out, but also where i think his own reading comes out, flashes of authors like the great David Gemmell. The Author is a man who lives and writes his experiences. He knows the fighting, but more than that he knows the logistics, the clothes, dancing, the everyday life that the people in this book would have… the only true mystery is the magic, and he has created such a depth of magic system that it is truly breath taking when you sit back an examine it, you can tell he has tried to pick any holes in it and closed everything he could to make it as realistic as possible, for magic it feels real.

This for me shows up so many “Epic Fantasy” series, there are no Tom Bombadil wasted moments, pointless characters or devices, everything has a purpose and an end game, even if it takes more than one book to discover it, and there are so many more threads and exciting moments to come. (although finding Capitano Parmenio in this book was blooming exciting)

This truly for me is the pinnacle of fantasy writing. And the ultimate in Fantasy/ Historical fiction cross over… the blending of genres is completed in this series.

Book of the Year…. unless someone can pull a rabbit out of the hat in the coming weeks.

2 responses to “Miles Cameron : A Plague of Swords (Review)”