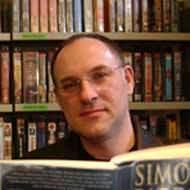 Simon Scarrow is a Sunday Times No. 1 bestselling author. His bestsellers include his novels featuring Roman soldiers Macro and Cato, as well as SWORD AND SCIMITAR, about the 1565 Siege of Malta, and four novels about the lives of the Duke of Wellington and Napoleon Bonaparte. He is the author with T. J. Andrews of the bestselling ARENA, introducing the gladiator hero Pavo, and the new ebook novella series INVADER. 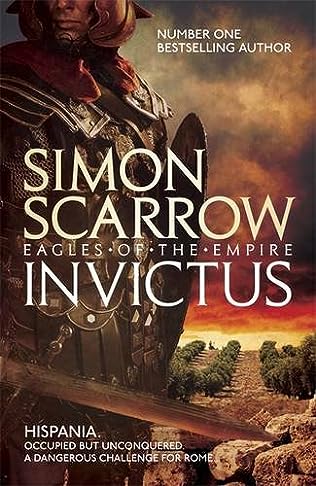 It is AD 54. The soldiers of the Roman army patrol a growing Empire, from the Mediterranean to the North Sea, from the Atlantic to the banks of the Nile. Rome brutally enforces its rule, and its legions are the most efficient and aggressive fighting force in the world. Two battle-scarred veterans of this army, Prefect Cato and Centurion Macro, have survived years of campaigning in Britannia and have been recalled to Rome.

Their time in the teeming, dangerously political city is short, and soon they are travelling with the Praetorian Guard to Spain, a restless colony where simmering tension in the face of Roman rule is aggravated by bitter rivalry amongst the natives. The challenges that face two old friends and their comrades in arms are unlike any they have seen before – in a land that declares itself unconquerable….

This is a tough story with a tough time for Cato and its this i feel that really gives this book its hard, realistic edge. For me this is a return to Macro and Cato of old and yet so much more. This could very possibly be the best book in the series so far, although that’s a very personal view, because as far as i can see Cato is slowly becoming Macro (whom i always thought carried the show). Cato is now a veteran of so many battles and missions, the holder of so many scars both visible and emotional, that a jaded cynical edge is coming through in his speech, decision and tactics.

As part of that return to the old days we see a return of protagonists of the past in the guide of Vitellius and Pulcher, both men who in their own way have tried to bring an end to Macro and Cato at some point in the past. The rome that our due return to is one with the succession of the empire in flux, Claudius now an old man, his freedman Narcissus is promoting Britannicus his son. Pellas, another freedman who has gained power and currently seems to have edged in front in the political game with his man Nero (Claudius stepson). The ebb and flow of the power struggle between these two factions spills out to many areas or Rome but also the empire in brutal and also subtle fashion, enemies are dealt with and yet all the while the empire must keep running, so when there is an uprising in Spain, both Macro and Cato are packed off with their old enemy Vitellius in charge to quell it, and save the finances of the army and the empire…. all the while Macro and Cato must not only fight the man in front but as usual worry about who might be trying to stick a knife in the back.

I really enjoyed that this book brought back some of the multi layer plot lines of old, the battle in front and the back stabbing politics or Vitellius, who is my fav bad guy of the series, he is such a smooth, sly silky bad guy, a born nasty politician. If i had one gripe for the book, it was the solution to the fight at the mine, it did jump out from its first mention…. but that could well be too many books read, (i leap ahead in my head for what each item could be used for). It doesn’t remove the power and destruction of the ending, the horror and sense of being used for the reasons of politics rather than good, you can see how and why this wears on Cato. For Macro its another day in the office, uncomplicated and simple, bad guy dead, good guy alive, job done, and i love his simplistic view over the top of Cato’s complex morals.

I’m very intrigued to see where our duo go next, there are many battles and perils to go before we hit the year of the four emperors, I’m intrigued as to where and how Simon Scarrow will keep this fresh voice going, and fresh is not anything to take lightly, after 15 books this is a huge achievement in my view.

I for one want to see Macro’s cynical philosophy and explosive action in many more books, its the perfect foil to Cato’s moral musing and strategic clarity.