Matthew Harffy lived in Northumberland as a child and the area had a great impact on him. The rugged terrain, ruined castles and rocky coastline made it easy to imagine the past. Decades later, a documentary about Northumbria’s Golden Age sowed the kernel of an idea for a series of historical fiction novels. The first of them is the action-packed tale of vengeance and coming of age, THE SERPENT SWORD. The sequel is THE CROSS AND THE CURSE.

Matthew has worked in the IT industry, where he spent all day writing and editing, just not the words that most interested him. Prior to that he worked in Spain as an English teacher and translator. He has co-authored seven published academic articles, ranging in topic from the ecological impact of mining to the construction of a marble pipe organ. 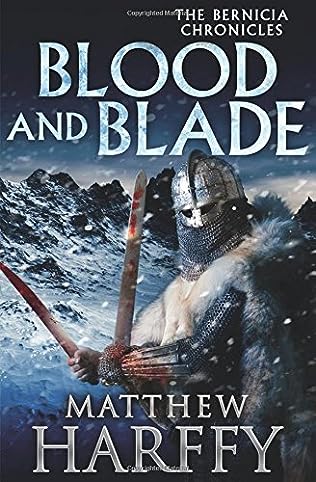 Buy the book on Kindle

Oswald is now King of Northumbria. However, his plans for further alliances and conquests are quickly thrown into disarray when his wedding to a princess of Wessex is interrupted by news of a Pictish uprising.

Rushing north, Oswald leaves Beobrand to escort the young queen to her new home. Their path is fraught with danger and uncertainty, Beobrand must try to unravel secrets and lies if they are to survive.

Meanwhile, old enemies are closing in, seeking brutal revenge. Beobrand will give his blood and blade in service to his king, but will that be enough to avert disaster and save his kith and kin from the evil forces that surround them?

In previous reviews i have stated that The Bernicia Chronicles was the gritty reality that Bernard Cornwell wished his Uthred series was. Matthew Harffy with impeccable research into the period, but also into insight into human nature weaves a tale of a troubled man, facing his past, and building a future.

Set in a period of history with limited known hard facts, there is still much for the author to call upon, the ruins and awe of the Roman world, the power and mystery of the new religion, Christianity, and the slow death of the old religions. The author has immersed himself in the known works of the time and absorbed the facts and suppositions, and blended them with his passion for the subject. All of this then told with a powerful set of characters woven into the path of the key players of the time provides an action packed story that is utterly engrossing.

With the lead character you can sense and feel the anger, confusion and passions that he is struggling with. Matthew draws on as many emotions as possible, but also the insecurities and angst of the young man thrust into a position of power, one coupled with extreme violence.