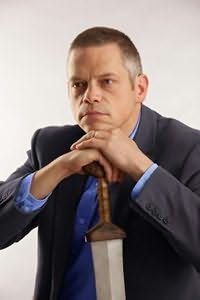 Ben Kane is a bestselling Roman author and former veterinarian. He was born in Kenya and grew up in Ireland (where his parents are from). He has traveled widely and is a lifelong student of military history in general, and Roman history in particular. He lives in North Somerset, England, with his family.
Eagles in the Storm  (2017)
(The third book in the Eagles of Rome series) 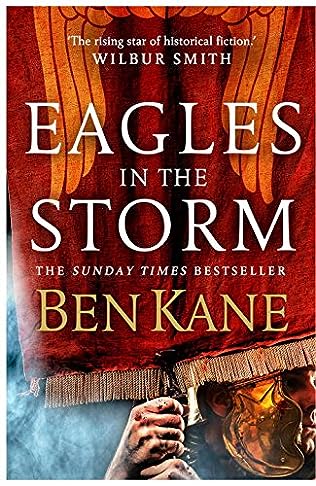 AD 15. The German chieftain Arminius has been defeated, one of the lost Roman eagles recovered, and thousands of German tribesmen slain.

Yet these successes aren’t nearly enough for senior centurion Lucius Tullus. Not until Arminius is dead, his old legion’s eagle found and the enemy tribes completely vanquished will he rest.

But Arminius – devious, fearless – is burning for revenge of his own.

Charismatic as ever, he raises another large tribal army, which will harry the Romans the length and breadth of the land.

Soon Tullus finds himself in a cauldron of bloodshed, treachery and danger.

Ben Kane is one of a select few authors, who writes books that sit in the category of “Must” read. The problem this creates for him and similar authors is that they have to compete with themselves and my ever increasing expectations. Now i’m utterly unqualified to know if Bens research is 100% accurate, i wish i could retain all the detail, but i do know the work he puts into ensuring it is, i do know when a book feels authentic and impassioned, and this like all his other work sits firmly in that category, this is a writer who has put himself in the kit and walked the miles to understand the pain of the legionary.

Once for our roman and Germanic friends time moves on, Arminius still hungers for Roman blood, but it will not be so forthcoming, not under a real General such as “Germanicus”, the legions are taking the fight well and truly to the Germanic tribes, the sneaky tricks of his traitorous actions are well known and less and less likely to defeat any further legions. Those few few men to survive the bloodbath that Varus led them into are eager for revenge, none more so than Centurion Lucius Tullus, Vengeance burns through him, drives him to greater and greater acts of martial heroics, desire for perfection from his troops and defeat for any and all barbarians. He wants Arminius’ head on a spike and he wants his legions eagle back. Opposite him is arminius, with an equal burning passion to tear down anything Roman that treads in his world, but also to make himself King or even Emperor of the Germanic Tribes, he is a man of both and neither world, more Romanised that he cares to admit.

This book takes you on many journeys from so many perspectives: You have both the opposing perspectives of Arminius and Tullus, riven by rage and a desire to destroy their opposing enemy. The difference being Arminius will do at any cost, no matter who he destroys in the process, Tullus only seems to be hell bent on destroying himself as he tries to come to grips with his foe, its his love for his men that pulls him back from the abyss. Tullus men bring the humour and the boots on the ground squaddie view, the everyday, among the destruction, the distance of orders and yet the close proximity of the action to give a uniquely close perspective of the fighting. There are some real laugh out loud moments in this book from characters like Piso, likewise there are some truly shocking irrevocable moments startling in their waste and pointlessness. I  loved this book, there are some startling shocks in there that make it very real. At times its light, at times its dark, its melancholy, its brilliantly funny and poignantly thought provoking… its got so much packed into it and is a real winner, this years bar met and exceeded Ben, bravo!