Sebastien de Castell had just finished a degree in Archaeology when he started work on his first dig. Four hours later he realized how much he actually hated archaeology and left to pursue a very focused career as a musician, ombudsman, interaction designer, fight choreographer, teacher, project manager, actor, and product strategist. His only defence against the charge of unbridled dilettantism is that he genuinely likes doing these things and that, in one way or another, each of these fields plays a role in his writing. He sternly resists the accusation of being a Renaissance Man in the hopes that more people will label him that way.

Sebastien is the author of the acclaimed swashbuckling fantasy series, The Greatcoats. His debut novel, Traitor’s Blade, was shortlisted for both the 2014 Goodreads Choice Award for Best Fantasy and the Gemmell Morningstar Award for Best Debut. He lives in Vancouver, Canada with his lovely wife and two belligerent cats.

Tyrant’s Throne  (2017)
(The fourth book in the Greatcoats series) 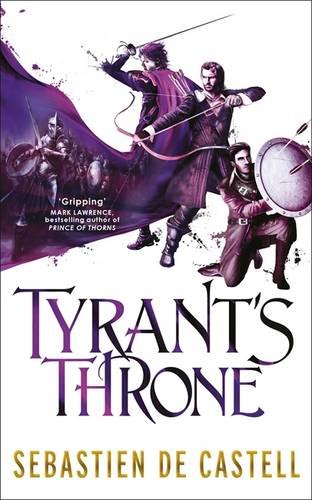 After years of struggle and sacrifice, Falcio val Mond, First Cantor of the Greatcoats, is on the brink of fulfilling his dead king’s dream: Aline, the king’s daughter, is about to take the throne and restore the rule of law once and for all.

But for the Greatcoats, nothing is ever that simple. In the neighboring country of Avares, an enigmatic new warlord is uniting the barbarian armies that have long plagued Tristia’s borders–and even worse, he is rumored to have a new ally: Trin, who’s twice tried to kill Aline to claim the throne of Tristia for herself. With the armies of Avares at her back, led by a bloodthirsty warrior, she’ll be unstoppable.

Falcio, Kest, and Brasti race north to stop her, but in those cold and treacherous climes they discover something altogether different, and far more dangerous: a new player is planning to take the throne of Tristia, and with a sense of dread the three friends realize that the Greatcoats, for all their skill, may not be able to stop him.

As the nobles of Tristia and even the Greatcoats themselves fight over who should rule, the Warlord of Avares threatens to invade. With so many powerful contenders vying for power, it will fall to Falcio to render the one verdict he cannot bring himself to utter, much less enforce. Should he help crown the young woman he vowed to put on the throne, or uphold the laws he swore to serve?

There are many books you can ruin with a review, this is truly one of them, as such i will stick only to how much i enjoyed it, not what its about. To give away any of the story would be to ruin the magic, the tragedy, the action and fun that awaits in every sentence on every page of this wonderful book and series.

Since i got my hands on book one of this series in 2014 i have been a huge fan and supporter of the series. It for me has always held the magic and mystery that is invoked by the tales of Dumas and the musketeers (a set of characters that captivated me as a child). The great coats having the je ne sais quoi of those 4 daring heroes of France, fighting not only those outside the law but also those rich conniving self serving traitors within the kings court.

Over there years there has been so many differing styles of Athos, Aramis, Porthos, Milady de Winter and D’Artagnan, Falcio and his cohorts bring to mind a mix of the 1993 Kiefer Sutherland era and the current BBC series. A more rough and tumble mixed with humor and sarcasm band of brothers. But this series is not just a play on an old favourite, it is so much more, the author plays with modern politics and the cynicism of this age, and mixes it with the differing ends of the spectrum of heroic fantasy. Our heroes are the epitome of what they stand for, ‘the law, honour and friendship’, and yet they must within that restriction navigate a cruel corrupt regime, dispensing justice to those who hate them or deride them.

This entire series has been written with a flair for the dramatic, the noble gesture, the  dangling of hope for the reader only to have it cruelly ripped away with a cold bath of reality. Yet not once does it ever phase our group of heroes, Falcio driven by his past to never fail, to always risk all on a daring plan, Brasti with his droll ever present wit and eagle eye both for a target and often the root of the problem and Kest who calculates every action every motive every scenario so that Falcio can then save them all with a large dollop of improbably action written in a way to make it all just so real, and improbability hidden in the spinning silvery blades and destructive power of Brasti’s bad jokes and deadly arrows.

This final book for me felt more alive and more emotional than the previous three, im not sure if it was the knowledge that it was the last (of the current crop….) I like to think its because the story was just that much more hard hitting, with a hugely explosive and emotive plot hidden among all the daring exploits, the shocking revelations and the inevitable failings as the group once more tried to save their world. I know for me it packed a huge punch and i shall miss them all. This is a series that has been read and re-read, and that’s not something i have time or patience for these days, except for the truly brilliant books/ series.

All i can say is that this sits up there as one of my all time fav fantasy series… (and I’ve read a heck of a lot of them)… so go buy them, go read them… don’t miss this.