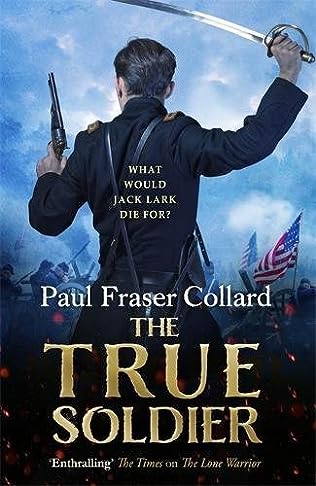 A hardened soldier, Jack has always gone where he was ordered to go – and killed the enemy he was ordered to kill. But when he becomes a sergeant for the Union army, he realises that this conflict between North and South is different. Men are choosing to fight – and die – for a cause they believe in.

The people of Boston think it will take just one, great battle. But, with years of experience, Jack knows better. This is the beginning of something that will tear a country apart – and force Jack to see what he is truly fighting for.

I have to be transparent from the start, i’m a HUGE fan of this series, If any writer has managed to capture the spirit and adventure of Sharpe and the daring of his character then its Paul Collard, but he has done it in his own unique way with his own unique character, Jack Lark. ( Jack Lark v Sharpe).

What this series has (for me) more than Bernard Cornwells Sharpe is a disquiet about war. Jack like Sharp is a beast of war, but Jack Lark sees and feels the darkness and futility of war, he like Sharpe has also been on both sides of the army line, both soldier and officer, but his was always riven with fear of being discovered. But no longer, now Jack is himself and essentially a mercenary, he is in America and Civil War has begun, Jack has been tasked with looking after a rich mans son, but Jack is also a consummate professional, and can’t help but impose his skills on his men, to turn them into the best fighting men they can be.

When i started reading this book i felt it had a slight melancholy edge, one that blended perfectly with the feelings i experienced after waking to the Manchester bombings, joining Jack in that feeling of hopelessness and darkness, Paul Collard had captured that feeling so well, the futility of all that death. The book moves on from there, but gone is the Jack we knew, he is older, and no longer having to hide who he is. But does he like who he has found himself to be, he like America is searching for his identity, fighting to make a place for himself.

This is the best book Paul Collard has written, the most accomplished with the most mature writing, i did tell him it wasn’t my fav read when i was about 30% in, but i was wrong, it is. As the book progressed it worked its magic on me and it made me love it so much so that once again i miss Jack Lark his absence leave a hole that hard for another book to fill, a year is a long time to wait until his next adventure but the wait i’m sure will be worth it as there is so much detail and depth, and so many places for Jack to be Jack in a Civil War torn USA.

One response to “Paul Fraser Collard: The True Soldier (Review)”