John Gwynne was born in Singapore while his dad was stationed there in the RAF. Up until he retired that meant a lot of traveling around, generally a move every three years or so.
He lives with his wife and four wonderful (and demanding) children in East Sussex. Also three dogs, two of which will chew anything that stands still. He has had many strange and wonderful jobs, including packing soap in a soap factory, waitering in a french restaurant in Canada, playing double bass in a rock n roll band, and lecturing at Brighton University
.I stepped out of university work due to my daughter’s disability, so now I split my time caring for her and working from home – I work with my wife rejuvenating vintage furniture, which means fixing, lifting, carrying, painting and generally doing what my wife tells me to do… 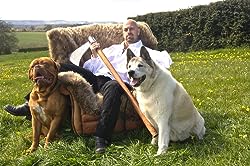 And somehow during this time I started writing. I’ve always told my children stories at bed-time, and they pestered long and hard for me to write some of it down. At the same time I felt that my brain was switching off a little – vintage furniture is my wife’s passion, whereas my passions are geekier! 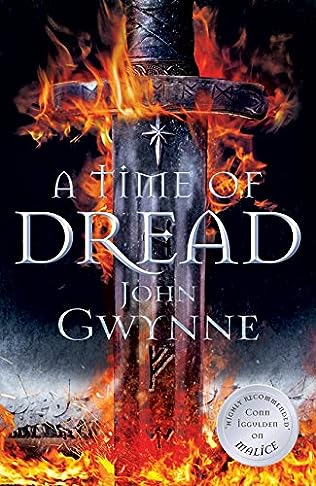 The Ben-Elim, a race of warrior angels, once vanquished a mighty demon horde. Now they rule the Banished lands. But their dominion is brutally enforced and their ancient enemy may not be as crushed as they thought.

In the snowbound north, Drem, a trapper, finds mutilated corpses in the forests – a sign of demonic black magic.

In the south, Riv, a young, tempestuous soldier, discovers a deadly rift within the Ben-Elim themselves.

Two individuals with two world-changing secrets. But where will they lead? And what role will Drem and Riv play in the Banished Land’s fate? Difficult choices need to be made.

In the shadows, dark forces are gathering, waiting for their time to rise. . .

He turned, looked around wildly, saw the camp in chaos,
giants and bears everywhere. Others were arriving, columns of
normal-sized warriors on foot, clad in black leather, with huge,
rectangular shields upon their arms, silver wings embossed
upon them. They spread in tight-packed lines about the camp,
surrounding everyone within it and their shields came together
with a resonating snap. Bleda glimpsed shadowed faces in silver
helms, smaller figures appearing amongst them: children, he
realized, offering water skins after a hard march. As he stared,
he saw a figure staring back at him, pale and dark-haired, a girl,
holding a water skin up to a warrior, even as she stared straight
at him.
Shadows flitted across the ground and the sound of wings
filled Bleda’s ears as the Ben-Elim swooped low. One flew
lower than the rest, great wings beating as he hovered above
Erdene and Bleda a long moment, grass and dust swirling, then
he alighted gently upon the ground. He was tall, taller than any
man Bleda had seen, his hair raven-black, wearing a coat of
bright mail and gripping a spear in his fist. Blood crusted the
spear’s blade.
‘Is this him?’ the Ben-Elim asked, eyes lingering on Bleda a
moment, then rising to Erdene.
Erdene was silent for so long that Bleda thought she would
not answer.
‘You must be strong,’ Erdene said to Bleda

Fear trickled through Bleda, then, at something in his
mother’s voice, and in the way the winged warrior had looked
at him.
He tried to master his fear, to control the prickling in his
eyes that threatened tears.
No. I am Sirak. I am son to Erdene, Lord-of-all-she-sees.
‘Good.’ The Ben-Elim stooped down and grabbed Bleda by
the collar of his tunic, hoisting him into the air. Bleda instinctively
snatched for an arrow from his quiver, nocking it to his
bow, but with a flick of his wrist the Ben-Elim slapped it from
Bleda’s grip, sent his bow falling to the ground. Bleda glared at
the Ben-Elim, expecting his mother to intervene, to protect
him, as she always had done, but she just sat upon her horse,
looking at him with her grey eyes.
‘I am Israfil, Lord Protector of the Land of the Faithful,
and you are coming with me,’ the Ben-Elim said. ‘A surety that
your mother will keep the peace once we are gone.’
‘What? Where?’ Bleda said, the Ben-Elim’s words seeping
through to him slowly, as if through water.
‘You are my ward, Bleda, and Drassil will be your new
home,’ the Ben-Elim said.
Ward. Drassil.
The words set Bleda reeling as if they were blows. Drassil
was the Ben-Elim’s fortress, far to the west.
I am to be their Ward. A prisoner, he means.
‘No,’ Bleda whispered. ‘Mother?’
A long silence, a look between Erdene and Israfil that spoke
of pride and shame, of the victor and the defeated. The fear
returned then, a chill in Bleda’s heart, seeping into his veins,
carrying a tremor to his lips.
The cold-face. Do not shame Mother. Do not shame my people.
‘It is agreed,’ Erdene said, her face a mask, only her eyes
speaking her message.
You must be strong.
‘It is the price that must be paid,’ the Ben-Elim intoned.

‘There will be peace in the Land of the Faithful. There is only
one enemy, only one foe who shall be fought: the Kadoshim
and their followers.’
‘No,’ Bleda said, both denial and refusal. He felt hot tears
bloom in his eyes, snatched at them, knowing the shame they
brought.
‘Altan and Hexa will not allow you to do this,’ Bleda said,
anger and fear twisting his voice, then there was a rushing of air
and a beating of wings as more Ben-Elim sped from the sky,
alighting around Israfil. The first was fair-haired, a long scar
running from forehead to chin. He threw something at Israfil’s
feet. They dropped with a thud, rolled in the grass and fell still.
Two heads, eyes bulging, blood still dripping.
Altan and Hexa.
The world went silent. Bleda’s vision was reduced to the
severed heads of his brother and sister. He heard something,
distantly, realized that it was him, that he was screaming, twisting
and bucking in Israfil’s grip, hands reaching to gouge the
Ben-Elim’s eyes, but Israfil held him at arm’s length until
slowly Bleda’s strength drained away, like wine from a pierced
skin. Israfil regarded Bleda with dark, emotionless eyes, then
finally shifted his gaze to the fair-haired Ben-Elim who had cast
the heads at Israfil’s feet. Although Israfil asked no questions,
did not even utter a word, the blond Ben-Elim spoke as if
answering a reprimand, his eyes dropping.
‘They would not surrender,’ he said, his feet shuffling in the
dirt. ‘They slew Remiel.’ His eyes came up, fierce and defiant,
and met Israfil’s. ‘They slew a Ben-Elim, gave me no choice.’
Israfil held his gaze a long moment, then gave a curt nod. With
a flick of his wrist he threw Bleda into the air, a giant catching
him and placing him on the saddle in front of him. Bleda found
new strength, fighting and squirming, tears blurring his vision,
but the giant held him tight.
Israfil waved his hand and then the giant was tugging on his
reins, shouting a command and the huge mountain of fur and

muscle beneath Bleda was turning, lumbering away from the
Ben-Elim and Bleda’s mother, from his kin and people, away
from everything he knew, away from Bleda’s whole world.
Towards his new home.
Towards Drassil.

John Gwynne has created a world of stunning quality, depth and complexity, this i’m sure is no surprise to anyone who has read the Faithful and the Fallen series but for someone coming in fresh, this new book can be ready as a stand alone (ok there are a few things that could be niggly mentions from the past, but i’m a purist who reads from book one) , all i can say is WOW what an amazing feast for the mind.

John Gwynne from the earliest pages weaves in his characters and plot, and subtly threads in his information drops to capture the reader and make them part of the tale, to draw them into this vividly real and highly imagined world. Like only the best writers, the author seems capable of making the fantastic utterly real and believable and thus transporting the reader right into the center of the story.

Finding a series that manages to sidestep a magic system (mainly) and yet provide a world that feels full of magic is a triumph, one i think created by the various beings that inhabit the world, there is nothing strange about creatures with wings or giants, or giant vampire bats… they all fit seamlessly into this world, a place both deadly and ruggedly beautiful, described so the scenery unfolds in the mind as you read.

I have to say i expected good when i picked up this book, i got stunningly great. Its January and i already have one book that sets the bar for the year.

Its very simple to be in with a chance to gain one of the 5 copies of this excellent book.

You get one point for every one of the following:

each point is an entry so if you do all the above, you get 5 chances to gain a copy.