Simon lives with his wife, children and dogs in rural North Yorkshire. Having spent much of his childhood visiting historic sites with his grandfather, a local photographer, Simon fell in love with the Roman heritage of the region, beginning with the world famous Hadrian’s Wall. His fascination with the ancient world snowballed from there with great interest in Egypt, Greece and Byzantium, though his focus has always been Rome. A born and bred Yorkshireman with a love of country, history and architecture, Simon spends most of his rare free time travelling the world visiting historic sites, writing, researching the ancient world and reading voraciously.

Simon’s early career meandered along an arcane and eclectic path of everything from the Ministry of Agriculture to computer network management before finally settling back into the ancient world. During those varied years, Simon returned to university study to complete an honours degree in classical history through the Open University. With what spare time he had available and a rekindled love of all things Roman, he set off on an epic journey to turn Caesar’s Gallic War diaries into a novel accessible to all. The first volume of Marius’ Mules was completed in 2003 and has garnered international success, bestseller status and rave reviews, spawning numerous sequels. Marius’ Mules is still one of Simon’s core series and although Roman fiction features highly he now has Byzantine, Fantasy and Medieval series, too, as well as several collaborations and short stories in other genres.

Now, with in excess of 25 novels available and 5 awaiting release, Simon is a prolific writer, spanning genres and eras and releasing novels both independently and through renowned publishers including Canelo and Orion. Simon writes full time and is represented by MMB Creative literary agents.

Look out for Roman military novels featuring Caesar’s Gallic Wars in the form of the bestselling Marius’ Mules series, Roman thrillers in the Praetorian series, set during the troubled reign of Commodus, adventures around the 15th century Mediterranean world in the Ottoman Cycle, and a series of Historical Fantasy novels with a Roman flavour called the Tales of the Empire. 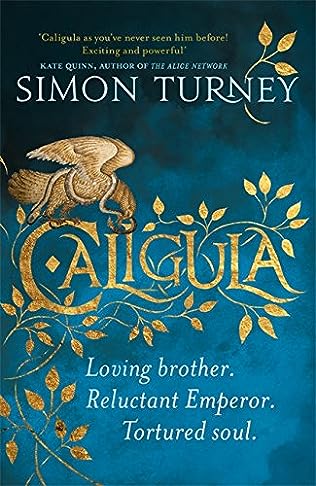 Everyone knows his name. Everyone thinks they know his story.

Rome 37AD. The emperor is dying. No-one knows how long he has left. The power struggle has begun.

When the ailing Tiberius thrusts Caligula’s family into the imperial succession in a bid to restore order, he will change the fate of the empire and create one of history’s most infamous tyrants, Caligula.

But was Caligula really a monster?

Forget everything you think you know. Let Livilla, Caligula’s youngest sister and confidante, tell you what really happened. How her quiet, caring brother became the most powerful man on earth.

And how, with lies, murder and betrayal, Rome was changed for ever . . .

As always full honest disclosure, Simon is an author i have known and reviewed for many years, and is someone i class as a very good friend, that said he knows if he turns out a stinker i’m going to tell him.

In Caligula i hoped for not another take on the madness and depravity of an emperor, and you know what Simon delivered, this is a very new and unique look at this emperor. Take everything you have thought and heard and read about the mad youthful emperor and sit it on a shelf, sit back and listen as Simon Turney delivers a new and highly plausible view of who and what Caligula really was and all from the view point of his younger sister.

The book starts with the innocence of youth and to some degree retains this with Livia for most of the book, a girl then woman who can see no wrong in her brother, and who is devoted to her family. Despite all the perils thrown at her, all the dangers and misfortunes, the deaths and murders in her youth her belief in her brother is unwavering, when she eventually see’s the parallels in her brother she may waver slightly in her conviction but never in her love and its this that will be her eventual downfall…. and the eventual downfall of the man himself.

Simon Turney delivers the entire story with a level of intriguing plausibility and  leaves you wondering if he isn’t just a bit more on the nose than the history books have always portrayed this emperor so loved by the people and the Legions. His writing style as always is highly engaging and draws you slowly and surely into the story until you find that the clock says 3am and you want to curse him for how you will feel at work the next day, but this is a mark of his talent as a writer, something that ranks him right up there in the pantheon of current great Historical fiction writers.

I had thought he could not surpass his ottoman series in my eyes, but he managed it with this book, a true masterpiece that leaves you questioning your opinions and views, and heading off to do some research yourself, and there is no greater accolade i think for a writer in this genre than to know he has educated and then sent you off to learn more.

I highly recommend this book