Giles has led a varied life, to say the least. During the 90s he was lead singer of pop group Upside Down, achieving four top twenty hit records, performing twice on Top of the Pops, and singing at such venues as the Royal Albert Hall, the N.E.C. and Wembley Arena. As a singer-songwriter he lived and toured for two years in Europe and has made music videos all over the world, from Prague, Miami, Mexico and the Swiss Alps, to Bognor Regis! To fund his writing habit, he has worked as a model, appearing in TV commercials and ads for the likes of Walls Ice Cream (he was the Magnum Man), Canon cameras and two brands of lager! He has been an advertising copywriter and lived for three years in New York, where he wrote copy for movie marketing company Empire Design but mainly worked on his first novel.

Family history (he is half Norwegian) inspired Giles to write his first historical novels: the acclaimed and bestselling RAVEN Viking trilogy – Blood Eye, Sons of Thunder and Odin’s Wolves. For his next series, he drew on a long-held fascination with the English Civil War to chart the fortunes of a family divided by this brutal conflict in The Bleeding Land and Brothers’ Fury. Giles also co-wrote Wilbur Smith’s No.1 bestseller, Golden Lion. In his newest novels – God of Vengeance (a TIMES Book of the Year), Winter’s Fire, and Wings of the Storm – he returns to the world of the Vikings to tell the story of Sigurd and his celebrated fictional fellowship. Currently, Giles is working on his next novel, Lancelot, scheduled for publication in the summer of 2018. Giles Kristian lives in Leicestershire. 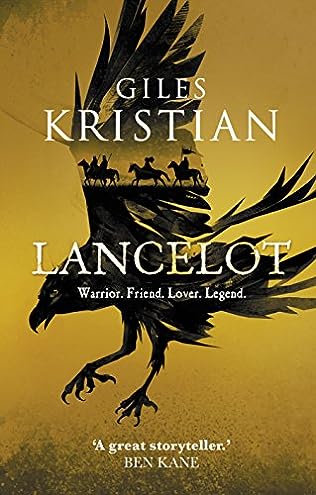 The legions of Rome are a fading memory. Enemies stalk the fringes of Britain. And Uther Pendragon is dying. Into this fractured and uncertain world the boy is cast, a refugee from fire, murder and betrayal. An outsider whose only companions are a hateful hawk and memories of the lost.
Yet he is gifted, and under the watchful eyes of Merlin and the Lady Nimue he will hone his talents and begin his journey to manhood. He will meet Guinevere, a wild, proud and beautiful girl, herself outcast because of her gift. And he will be dazzled by Arthur, a warrior who carries the hopes of a people like fire in the dark. But these are times of struggle and blood, when even friendship and love seem doomed to fail.
The gods are vanishing beyond the reach of dreams. Treachery and jealousy rule men’s hearts and the fate of Britain itself rests on a sword’s edge.
But the young renegade who left his home in Benoic with just a hunting bird and dreams of revenge is now a lord of war. He is a man loved and hated, admired and feared. A man forsaken but not forgotten. He is Lancelot.

Set in a 5th century Britain besieged by invading bands of Saxons and Franks, Irish and Picts, Giles Kristian’s epic new novel tells – through the warrior’s own words – the story of Lancelot, that most celebrated of all King Arthur’s knights. It is a story ready to be re-imagined for our times.

In 1995 Bernard Cornwell wrote the Warlord Chronicles, with that he set the bar for Arthurian tales. He took the world of knights in plate armour on horseback, with couched lances and their flowery medieval poetry of vanquishing barbarian foes with honour and knocked them right back to the 6th century, a post Roman world, riddled with Saxon invaders, a land with its opulent stone buildings falling down and no skills to repair them, back to the dirt the grime and the terror of small kingdoms stitching together parts of that Roman prowess to forge new alliances and petty grievances. No one has attempted to emulate that achievement since… Until Lancelot.

Giles Kristian is one of the finest storytellers in the genre, he has a lyrical poetry to his writing that has never failed to capture me and my imagination, so when i heard he was writing Lancelot i was excited, but also intrigued, after all Arthurian legend is about Arthur….. isn’t it?

What struck me immediately on starting the book was how the approach was similar to Conn Igguldens Gates of Rome (a No 1  best seller), taking a historical figure (or in this case myth) and starting their story at the beginning, showing how the man was made, the sequences, the accidents, the mistakes and the tragedies that shaped the man who would be. Not only do you get that shape, you get that emotion, the child becomes your family, you grow with them, you nurture them and hurt with them and love with them and this is the brilliance of the writer and his craft, to weave you into the fabric of the book, but also the soul of the characters.

Giles Kristian is very honest at the outset of this book in that its inception started at a time of great personal tragedy, and you can feel in the book and the story raw honest emotion, its not that the grief he must have experienced is expressed in the book, his writing transcends that, its more that every event is viewed with an exposed honesty, an openness that hides nothing, instead you feel the love. Given that the soul of this book is a love story, the story of Lancelot , Guinevere and ultimately Arthur, sworn lord and friend of one and Husband of the other,  the heartbreak that must ensue, and ultimately for one a betrayal, that outpouring of emotion has so many outlets, so many paragraphs to fill and Giles Kristian pored into them until they over flowed. This is a book that you feel as much as you read.

What we end up with is utterly staggering. A book to be beyond proud of. Giles Kristian has surpassed the Cornwall trilogy in a single title. Truly I’m in awe of this book, I’ve been spell bound for days, and the ending … I’m emotionally spent. … really a honour and a privilege to read it.

I cannot recommend this book enough, no matter the genre you love, if you love great writing and great stories, read this book.