(b.1973)
Paul’s love of military history started at an early age. A childhood spent watching films like Waterloo and Zulu whilst reading Sharpe, Flashman and the occasional Commando comic, gave him a desire to know more of the men who fought in the great wars of the Nineteenth and Twentieth Centuries. At school, Paul was determined to become an officer in the British army and he succeeded in wining an Army Scholarship. However, Paul chose to give up his boyhood ambition and instead went into the finance industry. Paul stills works in the City, and lives with his wife and three children in Kent. 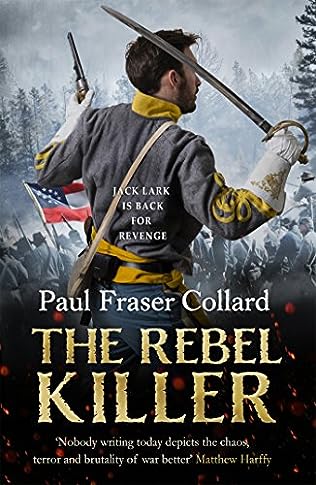 Paul Fraser Collard’s roguish hero Jack Lark – dubbed ‘Sharpe meets the Talented Mr Ripley’ – returns once more, switching sides to join the ranks of the Confederate Army. This latest adventure will see Jack journey through the Southern states as the American Civil War continues in earnest and is a must-listen for fans of Bernard Cornwell and Simon Scarrow.

Jack Lark, once the Scarlet Thief, has abandoned the rolling Virginian hills and is on the run with Rose, an escaped slave girl who is more than his match. Soon he will find his way into the uniform of the Confederate Army in an adventure that will culminate at the Battle of Shiloh – the bloodiest conflict in American history at its time.

Review
Anyone who reads this review blog will know that im a big fan of Paul Collards writing, since book one he has managed to capture the spirit of Sharpe, that action and pace, the thrill and horror of battle but it was tempered with a style and pace that engaged and held the reader pinned to their seat, i’ve usually finished each book in a single sitting, never wanting to leave Jacks side.
Unlike Sharpe, Jack has grown as a character, he has book by book become more complex, the introduction of introspection and doubt, the subtle weaving of PTSD into his core fabric. Since the Siege of Delhi, Jack has seemed and felt indestructible, but he has become darker, a true killer yet one who saves his demons for the battle field. The Rebel Killer takes jack deeper into that darkness and his own mortality.
The Rebel Killer is somewhat different from the other books in the series, it holds the full horror of war, mortality and the depravity of the human condition, the true horror of civil war. Jack must face his own limits and ultimately change his view of who he is and what he can do, can Jack change the course of his life? his journey to that is one of pain and revenge, like many he must hit the darkest depths of his soul before he can search for absolution.
As always i highly recommend this and all Paul Collards books.
(Parm)
Series
Jack Lark
0.5. Rogue (2014)
1. The Scarlet Thief (2013)
2. The Maharajah’s General (2013)
3. The Devil’s Assassin (2015)
4. The Lone Warrior (2015)
5. The Last Legionnaire (2016)
aka The Forgotten Son
6. The True Soldier (2017)
7. The Rebel Killer (2018)
8. Untitled (2019)
Recruit (2015)
Redcoat (2015)
The Jack Lark Library (omnibus) (2017)