Miles/ Christian Cameron was born in Pittsburgh, Pennsylvania in 1962. He grew up in Rockport, Massachusetts, Iowa City, Iowa, and Rochester, New York, where he attended McQuaid Jesuit High School and later graduated from the University of Rochester with a degree in history.

Some are warriors, some captains; others tend to the fallen or feed the living.

But on the magic-drenched battlefield, information is the lifeblood of victory, and Aranthur is about to discover that carrying messages, scouting the enemy, keeping his nerve, and passing on orders is more dangerous, and more essential, then an inexperienced soldier could imagine . . . especially when everything starts to go wrong.

Battle has been joined – on the field, in the magical sphere, and in the ever-shifting political arena 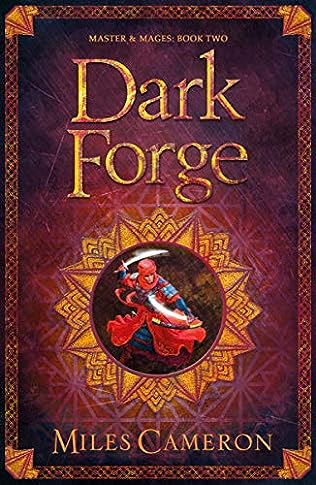 Miles Cameron burst onto the fantasy scene in 2012 and quickly established himself as one of the best writers in the genre, not a huge surprise given that he is also Christian Cameron arguably the best writer in Historical Fiction genre. In both genres he takes all his knowledge as a soldier, intelligencer, historian and re-enactor and couples that with a writing ability that is the envy of many established writers.

The big worry for any reader and writer in a new genre is that when a series is as good as The Traitor Son cycle, then what comes next is it possible to reach that same heady heights as series one? and TSC is one of the best epic fantasy series you can find so that’s a tough ask.

But Miles/ Christian gave us Master and Mages: Cold Iron, somehow he managed to create yet another world, yet another world structure, magic ethos and more and made it new and original and even better than TSC.

Dark Forge progresses that high skill level of writing and that extraordinary world building. But more than the world building you have layers and layers of politics, magic, friendship, honour and all written through the eyes of such real and honest characters. people you can read and love and shed blood with.  Thats the true power of his writing, the characters that while they live in another time and a place of magic, you feel totally connected to them, and so feel pulled ever deeper into the plots and the intrigues.

Be prepared for all out action and intrigue in Dark Forge, this book follows the further growth of Aranthur, The battles get bigger and more desperate, the magic deeper and more complex and the intentions of the dark forces more obscure…. can Aranthur unravel the mad schemes of the pure? can you the reader keep up with all the spy craft? the layers of mystery and misdirection? the huge scale battles and city sieges? Can you keep up with the one on one swashbuckling sword scenes? and the utter scale of adventure that’s both hugely complex and yet so simply and elegantly written.

I loved this book, it was my first read for a few months, having taken time out… and what a way to return. Easily a contender for book of the year.