Anthony Riches (in his own words)

Following a childhood which featured a deep interest in the military rooted in my father and grandfather’s service in the two world wars, I took a degree in Military Studies at Manchester University. Working for a succession of blue chip companies over the next twenty five years,

I gravitated into business systems and change project management, and I’ve worked as a freelance project manager in the UK and Europe, the USA, the Middle and Far East over the last decade.

Over the same period I’ve gradually refined my ability to write fiction, initially for my own entertainment but more recently with the serious aim of achieving my debut publication. The manuscript of Wounds of Honour eked out a precarious ten-year existence on a succession of computer hard drives and memory sticks until a life-changing encounter in Belfast energised me to rewrite the manuscript and seek publication. Thanks Gerry!

I’ve been married to Helen, our family’s only true adult for 25 years now, and we live in Hertfordshire with our three children. I’m a confirmed petrol head, and I spend my spare time listening to music, reading (mainly on planes going to and coming back from work) and surfing internet car reviews with a purposeful glint in my eye. 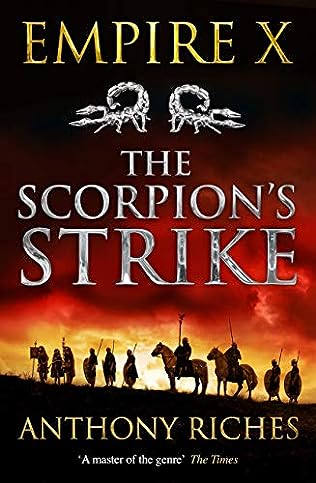 Set in the second century AD, The Scorpion’s Strike continues the story of Marcus Aquila’s fight for justice for a family ripped asunder by imperial assassins.

Still seeking revenge, Marcus finds himself thrown back into the heart of the chaos that is shaking the Roman Empire to its roots.

Fresh from their close escape from imperial betrayal in the German forest, Marcus and the Tungrians are ordered to Gaul, where an outlaw called Maturnus is wreaking havoc. Havoc that may be more than mere banditry, as deserters and freed slaves flock to his cause: rebellion is in the air for the first time in a generation.

And if escape from Rome’s memories is a relief for the young centurion, he soon discovers that danger has followed him west to Gaul. The expedition is led by Praetorians whom he has every cause to hate. And to fear, if they should discover who he really is.

I’ve been looking forward to reading a new Empire book for a while, the entire series is a breath of fresh air in the genre, fast paced, full of amazing characters, that drive the plot, the excitement and the emotion.

That said before i start any Empire book i message Tony and threaten him that if he has killed Dubnus we will be having words… that’s the true mark of these books, not one single character is safe, the series now could keep going even with the death of its lead character, with that hanging over every page it lends an extra edge to the tension of the entire story.

After a break of three years i can certainly say that Anthony Riches has lost none of his swagger when it comes to ballsy fast paced action and comedic repartee amongst his large array of leading characters. One of the most engaging things in the book is that anyone from Marcus to Morban could lead a story, and so we the reader get perspectives from all levels of the Legionary life, and in this book a great look at the Praetorian mindset.

As ever i wont add any spoilers for the plot, but suffice to say as with almost every Anthony Riches book, once you crack open the book to the first page you need to hold on tight, the book will not let you go, fortunatly you can take the book with you when you need a toilet break, because from the first page to the last its Danger, daring, blood and glory, death and destruction and full of laugh out loud banter between the troops.

I never wonder if one of the books in this series will be good, they all are, its just how many rude messages i need to send the author for killing certain people!!