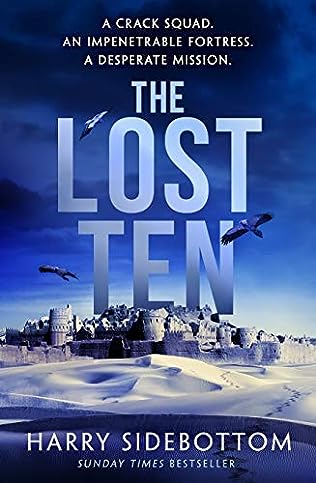 When Valens, a junior officer in the Roman Army, joins a crack squad of soldiers on a dangerous mission, little does he know what’s in store for him. Tasked with rescuing the young Prince Sasan, who has been imprisoned in the impenetrable Castle of Silence, the troops set out across Mesopotamia and into the mountains south of the Caspian Sea.

Deep in hostile territory, inexperienced Valens finds himself in charge. And as one by one his soldiers die or disappear, he begins to suspect that there is a traitor in their midst, and that the rescue is fast becoming a suicide mission.

Valens must marshal this disparate group of men and earn their respect, before it’s too late . . .

Harry Sidebottom seems to have hit on a rich vein of fast paced action adventure Historical fiction ideas, his last book the Last Hour was a very 24 esque romp around Rome, a book that was almost impossible to out down as it bounded from one cliff hanger to the next.

The Lost 10 takes a much more “Eagle has landed” approach, with a small select group of Frumentarii sent on an impossible mission, with a traitor in the team, can they succeed, can they survive? and who is the thorn in their side?

Harry Sidebottom as always, gives us a very character driven story, introducing us to the more shadowy arm of the roman military machine, the spies, the murderers, the men capable of blending in and surviving again the odds. His plot has you hooked on the action and the adventure, while at the same time trying to work out who the traitor could be from the crumbs that he drops. Set in the east as we head into Persia, we see a different side of ancient life, a different set of rules and morality and religion and as always Harry Sidebottom educates as he entertains.