Commodus  (2019)
(The second book in the Damned Emperors series)

Rome is enjoying a period of stability and prosperity. The Empire’s borders are growing, and there are two sons in the imperial succession for the first time in Rome’s history. But all is not as it appears. Cracks are beginning to show. Two decades of war have taken their toll, and there are whispers of a sickness in the East. The Empire stands on the brink of true disaster, an age of gold giving way to one of iron and rust, a time of reason and strength sliding into hunger and pain.

The decline may yet be halted, though. One man tries to hold the fracturing empire together. To Rome, he is their emperor, their Hercules, their Commodus.

But Commodus is breaking up himself, and when the darkness grips, only one woman can hold him together. To Rome she was nothing. The plaything of the emperor. To Commodus, she was everything. She was Marcia. 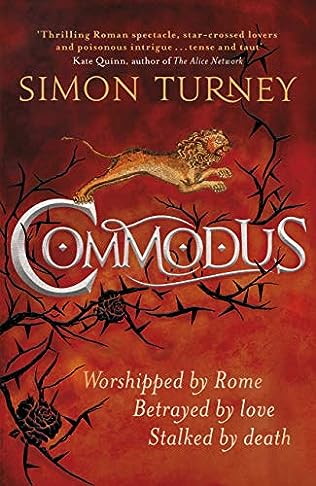 I think this is book 40 for Simon, not a bad tally for 10 years work…. and to date not a single bad book. This latest book “Commodus” shows just how far he has developed in his craft as an author.

Set once again against the turbulent backdrop of Imperial Rome Simon Turney opts to tell the story from a unique perspective, a young free woman with unfettered access to the imperial family and the emperor to be, giving the reader a very individual and personal insight into how the young life and psyche of an emperor was formed and the damage that emotional and physical trauma can do to a person.

What Simon Turney has produced is a very personal story woven from so many perspectives, the love of family, the tragedy of life in ancient Rome, the perspectives of Slave through to emperor, the emotion and loss that can hit any family no matter their station or their wealth, yet always slanted through the perspective of a young girl and then young woman.  As with Caligula where once we may have perceived this emperor as “mad” or “despotic” or what ever your own view from the history books, these accounts bring a human element to them and would take a very hard hearted person to not sympathize with Caligula or Commodus, and that is a real testament to the writing ability of the author, to weave us into the story emotionally as well as physically. I’ve always known Simon had the ability to be one of the best in the genre, these latest two books prove that and more.

Omnibus
Forged in Fire (2017) (with Prue Batten and Gordon Doherty)