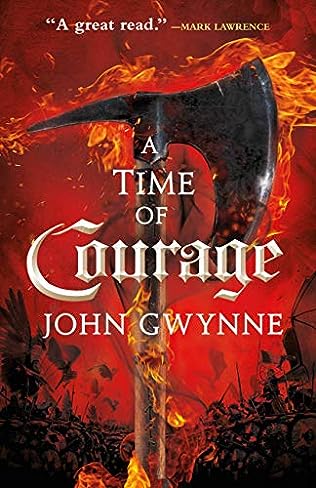 The demon king Asroth has been freed from his iron prison. Now, alongside his dark bride Fritha, he plans to conquer the whole of the Banished Lands.
In the shadows of Forn Forest, Riv and the surviving Ben-Elim desperately search for a way to unite those who remain against Asroth’s vast army.
Far in the west, Drem is with the Order of the Bright Star, besieged by a demon horde. Their fragile defenses are on the brink of shattering, but they know that it is better to fight and die than to live without hope.
And across the Banished Lands, armies are heading south, to settle ancient grudges and decide the fate of humanity.

A Time of Courage brings to conclusion the epic second trilogy from John Gwynne, as with all final books in the series its a bitter sweet read, as you race towards a conclusion, you also fear the ending, the end of a long standing relationship with so many truly wonderful characters and a land that has become home on many evenings.

As a stand alone series Blood and bone is simply brilliant, but when you wrap in The faithful and the Fallen you get a series that can easily sit among the all time great fantasy series, Blood and bone brings this to the fore even more than any other book with so many reflections to the past, bringing together the 2 series and the wrapping up of a war that has spanned thousands of years and pages.

There will be many who find the final battle both breathless, heart breaking and the utter chaos that is battle and see this as the best of the book and series, and i loved it…. but i loved more the pulling together of all the bands of people, all the parts of the host that would defend the land and look to defeat Asroth and his army. There was so much life, love and hope in those final weeks, and while you knew no one was safe from the Banished lands ultimate killer (the author), you had as much hope as the characters that your favorites would make it, that love would conquer all, that those who had worked so hard and given so much would receive the reward of a peaceful life…. And when some of those people fell it was to cries of nooo, and true emotional loss…. such is the power and skill of the writing.

So while i now suffer my book hangover, that im sure will last for a while… i utterly recommend this book, this series and all of John Gwynne’s writing, believe me, the pleasure is worth the pain of the end….. and there is always hope of a return…. 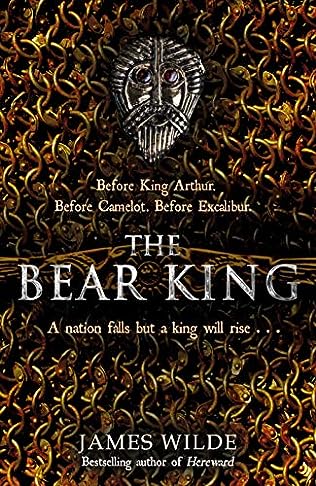 For all the darkness in the land, there is hope. And it rests with one man. Lucanus – the one they call the Wolf – is a warrior. He wears the ancient crown of the great war leader Pendragon, and he wields a sword bestowed upon him by the druids. And he is the guardian of a secret entrusted to him and to protect that secret will demand untold bravery and sacrifice beyond measure – but to lose it would mean the end of everything worth fighting for.

Before Camelot. Before Excalibur. Before all you know of King Arthur. Here is the beginning of that legend….

I grew up reading the legends of Robin Hood, King Arthur etc… and Arthur was always the head of a band of knights, and as a kid you didn’t question it, it wasn’t until much later that the glaring issues of arms and armour, ethos etc presented themselves… so it was fantastic to have an author like Cornwell challenge all that with his Warlord Chronicles to bring Arthur back into the muck and grime of the dark ages, Now both Giles Kristian and James Wilde have taken that further with examining the myth and coming at the tales from a new perspective, so for me there are now 3 must read Arthurian tales, Bernard Cornwell (Warlord Chronicles), Giles Kristian (Lancelot / Camelot) & now James Wilde (Dark Age).

Bear King completes the Dark Age saga, where we started pre Arthur, the story arc comes to its climax with the introduction of Arthur and not how i would ever have envisaged it. James Wilde mixes myth and story telling into the historical backdrop of the Roman Withdrawal of Britain, the power vacuum and the strife this causes he brings in old enemies, old friends are reunited, and new fantastic characters ( Niall of the Nine hostages being my favorite), the backdrop is the quest for the Cauldron of the Dagda / Holy Grail .. and the pending war with rivals to the crown.. the only man who can pull together the people, to stave off the impending darkness is Lucanas whom everyone believes is dead, but legend says will return in the hour of need, the true Pendragon…

I was riveted to this book, James Wilde weaves this final book in the series with such skill and attention that i struggled to put the book down at night. His characters are as always perfectly drawn, fallible yet heroic, his friends dedicated, funny, sardonic and better men than they know, there is betrayal, heroism, vast action and terrible fear …. true light can only been seen after terrible darkness and its through this darkness that James takes the reader…. this is simply and excellent tale, one of the best re-imagining of the iconic Arthur myth out there, and for me James Wilds best book to date. 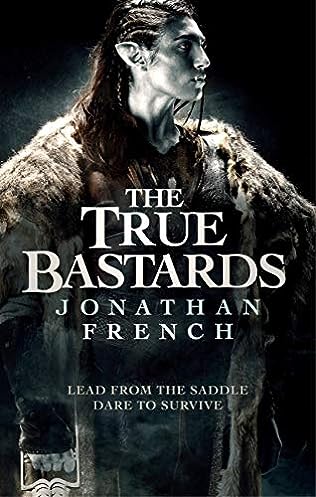 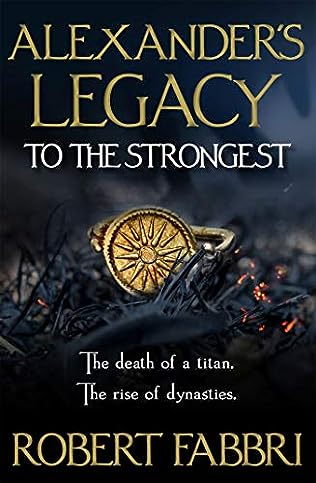 ‘I foresee great struggles at my funeral games.’

Babylon, 323 BC: Alexander the Great is dead, leaving behind him the largest, and most fearsome, empire the world has ever seen. As his final breaths fade in a room of seven bodyguards, Alexander refuses to name a successor. But without a natural heir, who will take the reins?

As the news of the king’s sudden and unexpected death ripples across the land, leaving all in disbelief, the ruthless battle for the throne begins. What follows is a devious, tangled web of scheming and plotting, with alliances quickly made and easily broken, each rival with their own agenda.

But who will emerge victorious: the half-chosen; the one-eyed; the wildcat; the general; the bastard; the regent? In the end, only one man, or indeed woman, will be left standing..

I’ve been a fan of Robert fabbri and his writing since Tribune of Rome came out in 2011, and to hear that he was tackling one of my favorite historical characters (Alexander) was a real buzz, even more so when i learned that the series would begin at the end, the end of Alexanders life. The turmoil his passing unleashed across his empire was huge and changed the face of the ancient world, there was and is so much scope and so many hugely interesting characters.

Fabbri keeps in the main to real historical personages in this book, only interspersing the occasional fictional character, he brings those historical notables to life, and i have to say from the start Eumenes is my stand out favorite… who doesn’t love an underdog and a devious Greek one, Fabbri really brings that out in his writing, but he is just one of the many stunning characters in the book as we watch the great men and women of the time vie for power and control of the great empire Alexander carved. Many times its mentioned that Alexander didn’t name a successor because he wanted this division and strife and he wanted no one to eclipse his achievements…. if that really was his intention then Robert Fabbri captures it brilliantly.

If i had to have one nagging annoyance at the book it was the way it was structured, changes of time and location were not defined in the book, eg Eumenes could be talking about Cassandra and what his intentions were and on the next line he was talking to her, even though that may be a day or week later in another town, it just happened on the next line…. that was somewhat confusing for a while and threw off the pace of the book for me.

But the story is stunning, the politics of the time is just mind boggling but told in a pacy engaging way, the battles and the warriors brought to life in vivid detail, i love it when the writer can transport you to the dust , the muck, the blood sweat and horror of a battle and also the stress and frustration of the politics… as usual Robert fabbri does not disappoint in this.

Im really looking forward to the next in this series, this is one of the great periods of history, told with true style.