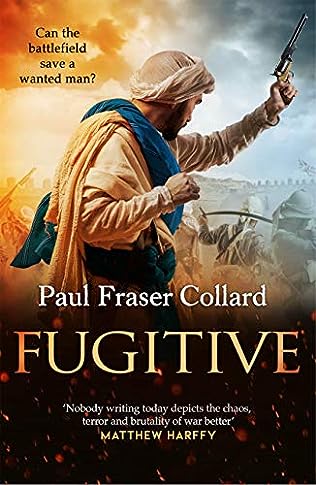 London, 1868. Jack has traded the battlefield for business, running a thriving club in the backstreets of Whitechapel. But this underworld has rules and when Jack refuses to comply, he finds himself up against the East End’s most formidable criminal – with devastating consequences.

A wanted man, Jack turns to his friend Macgregor, an ex-officer, treasure hunter and his ticket out of England. Together they join the British army on campaign across the tablelands of Abyssinia to the fortress of Magdala, a high-stakes mission to free British prisoners captured by the notorious Emperor Tewodros.

But life on the run can turn dangerous, especially in a land ravaged by war . . .

In 2013 i was asked to review a new title called “The Scarlet Thief”, and so was born one of my new favorite characters. Jack Lark was and is a newer grittier, tougher version of Sharpe, a more fallible and broken character, and at the same time one that felt so much more real and filled with adventure.

Jack Lark has had a rough time of it under Paul Collards pen, but every story is realistic and plausible and high octane fun. More than anything Jack Larks growth as a character has been a pleasure to experience, even the toughest, darkest days, because those are the ones where you the reader dig deep to urge him on, to hope for his survival and success, and experience every nuance of the story along side him.

Fugitive in the beginning sees a more peaceful Jack, a man enjoying the fruits of his labour, but at the same time you can sense the hidden darkness, like a caged tiger placidly walking the boundaries of his cage, looking for that moment when his true nature can explode and he can once again let loose his true nature, a killer of men.

Very soon life decides once again that Jack Lark isn’t destined to enjoy a peaceful retirement. He falls foul of a local gangster and needs to leave London fast, so adventure beckons in the form of an expedition to Abyssinia and to the fortress of Magdala. His friend Macgregor, an ex-officer and treasure hunter had asked for him to join him in making a name and making themselves rich, what hadn’t appealed to Jack before has suddenly become a lifeline, and so Jack joins a group of 4 headed into the unknown . As always with Jack, danger and death will be their companions and only Jack truly has the experience to help them survive whats ahead.

After some truly dark times for Jack that started in the devils assassin, i think this book helps Jack truly come to terms with who he is, his true nature and his place in the world, where he had fought against the darkness he accepts it now, a darkness he can control, unlike the evil men of the world Jack can turn to his darkness to survive and to save others but when peace reigns again then jack can settle back again to enjoy life, or to seek out more adventure. Abyssinia see’s jack come closer to death than ever before and to come alive in a way he hasn’t for a long time.

As always Paul Collard has written a truly wonderful story, one that pulled me into Jack Larks life again from page one and didn’t let me go until i turned the last page. He is one of the very few authors that i have to set aside a whole day for, because i simply cannot put the book down. Its a day i look forward to every year, drinking some beers, and sitting back in my comfy chair so i can devour the book in a single uninterrupted sitting.

Very Highly recommended, as is the whole series.