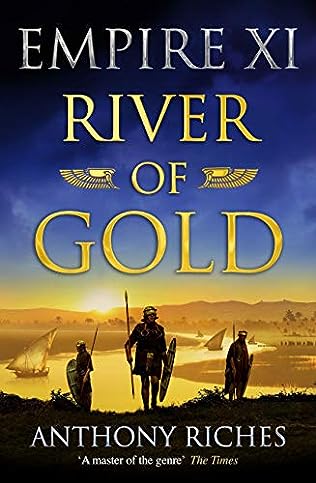 After saving the emperor’s life in Rome, Marcus and his comrades have been sent across the sea to the wealthy, corrupt Greek metropolis of Aegyptus, Alexandria.
An unknown enemy has slaughtered the garrison of the Empire’s last outpost before its border with the mysterious kingdom of Kush. Caravans can no longer reach the crucial Red Sea port of Berenike, from which the riches of the East flow towards Rome.
The Emperor’s most trusted and most devious adviser has ordered Marcus’s commander Scaurus and his trusted officers to the south. With orders that are tantamount to a suicide mission, and with only one slim hope of success.
Can a small force of highly trained legionaries restore the Empire’s power in this remote desert no-man’s-land, when faced by the fanatical army of Kush’s iron-fisted ruler?

11 Books into this series and it still feels fresh new and exciting, which is a testament to the authors skill in writing a well researched and exciting story, but most of all a story full of real and alive characters, characters who make you feel the story. Anthony Riches main skill as a writer for me has always been his characters, and when he couples that with his utter disregard for their safety you get a book and series that is always going to thrill, always going to make you turn the next page and never let you put the book down until the last page is turned.

Anthony Riches is on my very short list of authors who are a one sit read, the book needs a whole day set aside to just sit back and enjoy, because the people and the plot wont allow for anything else, wont allow you to put it down for a moment. You spend the whole book wondering which main character he will murder next, and when you find it, when that moment hits you can imagine the evil little glint in his eye, because he knows you never saw it coming. He has developed so many characters to be the “Main character” that absolutely no one is safe, and this adds a truly unique element to his series. Mixing that with his truly impressive ability to thill and entertain has created on of the best series in the genre.

I loved River of Gold because i knew nothing of Kush, and as always with this authors books he left me just enough information and education to want to go and find more about this fascinating empire and its culture. I met new characters that i feel will be back in book 12, and after an utterly thrilling roller-coaster ride full of misdirection, action, humour, sudden violence and intricate problem solving, i was left totally satisfied with the story because there is that perfect mix of completion and desire for more.

Anthony Riches remains one of my all time favourite writers, because i can read anything he writes again and again, and never lose a moments enjoyment.

I highly recommend this book and the entire series.