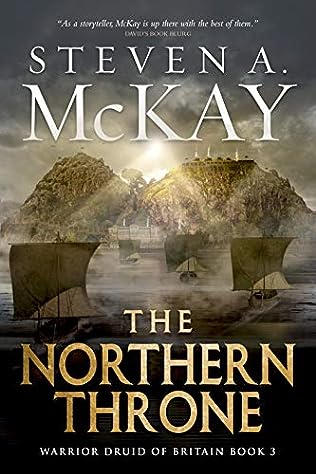 (The third book in the Warrior Druid of Britain series)

Northern Britain, AD431, Spring.
Bellicus the Druid and his friend Duro, a former Roman centurion, have already suffered a great deal in recent years but, for them, things are about to get even worse.
Britain is changing. The Romans have gone and warriors from many different places seek to fill the void the legions left behind. In the south, the Saxons’ expansion seems unstoppable despite the efforts of the warlord Arthur, while north of Hadrian’s Wall various kings and chieftains are always looking to extend their borders.
In Dun Breatann, Bellicus believes the disparate northern tribes must put aside their differences, become allies, and face the Saxon threat together, under one High King. Or High Queen…
Small-minded men don’t always look at the bigger picture though, and, when Bellicus and Duro seek to form a pact with an old enemy, events take a shocking and terrible turn that will leave the companions changed forever.
This third volume in the Warrior Druid of Britain Chronicles is packed with adventure, battles, triumph, and tears, and at the end of it a new course will be set for Bellicus.
But at what cost?

I’ve enjoyed watching the growth of Steven as a writer, i’ve been lucky enough to be involved in giving him feedback on some of the books, and most of all i’ve enjoyed this latest series “Warrior Druid of Britain” where he can grow his own main character, but also make it live on the edges of of one of the greatest tales of Britain, King Arthur and Merlin. Each book of this series sees the growth of Bellicus and the formation of his friendship with Duro a former Roman Centurion. There are shades of Macro and Cato (Simon Scarrow) in their relationship, but in these tales they are pure Mckay in their telling.

This latest book sees our duo put to the their greatest test, tortured , abused and betrayed, they must survive and they must save their queen and their home and as important they must find a way to get south and help Arthur and Merlin, to fight the great Saxon threat. There are some truly harrowing moments for both our heroes and neither will be the same by books end, but blimey its a hell of a ride for the reader, one i cant wait to continue.

Every book Steven has written has seen his skill as a writer evolve and grow to the point now that he is as good as anyone in his genre, if you haven’t read his work you are now spoiled for Legends with both Robin Hood and now Arthurian Britain… and both series are an excellent read.

Filed under Steven A McKay

One response to “Steven A Mckay: The Northern Throne (Review)”