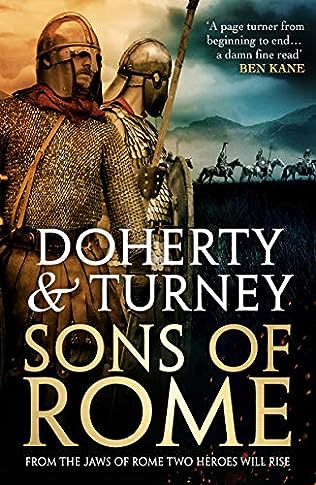 A Choice of Emperors
by Gordon Doherty & Simon Turney

Between 305 and 312 AD, the Western Roman Empire was dominated by two figures. The conflict between Constantine and Maxentius – and in particular their seismic battle at the Milvian Bridge in 312 – has grown over the centuries to achieve mythic proportions, and like all myths we must look beyond the obvious if we wish to discern the truth. The rivalry between the two emperors was not a religious schism, nor a personal crisis, it was simply a conflict between two men who claimed rulership over one land. That Constantine has come down through history to become arguably one of the most famous of emperors, while Maxentius has been vilified and damned by the centuries and even then to become an almost forgotten figure, is largely the work of Christian writers colouring events with their inescapable bias.

Constantine’s history before his rise to the purple is scarcely covered, with a few events and anecdotes and little in the way of confirmed motivation. Maxentius’s life, even throughout the better-recorded period during which the two emperors came to blows, is barely detailed at all except insofar as it impacts upon Constantine. So what was the history of these two men who rose to become the two most powerful figures in the West, and was there more to their conflict than the simple inevitability of power-clashes?

When Gordon and Simon first conjured up the idea of writing the tale of these two larger-than life figures, the first challenge was deciding where to begin. Well, what better place to begin than at the beginning? The child is the father of the man, after all. Thus, Simon and Gordon instigated their tale during the early years of Maxentius and Constantine, in better times, prizing open their little-known childhoods and trying to understand the humans behind the history.

What history does not tell us is whether their paths crossed in those earlier days. This was a welcome challenge for Gordon and Simon, the opportunity to debate and speculate over how the two characters might plausibly have possibly known one another in childhood and adolescence. Both were children of Rome’s leading men, so it seemed likely that they could have met at the many imperial court gatherings across the empire. The starting point seized, the story planned, Gordon and Simon were all set to begin writing. All that remained now was to each settle upon which protagonist each author would write.

Simon’s literary career thus far had been solidly built upon tales of the Roman military. As such, the action-packed life of Constantine, with his war-hero record and empire-spanning military career which propelled him to power, might seem the obvious choice. However, Simon has always had a soft spot for history’s underdogs, and the idea that Maxentius, perhaps Rome’s quintessential underdog, might be more than simply a black-and-white villain was too much to refuse. With little confirmed information about Maxentius in sources, and much of that clearly apocryphal and biased, the opportunity to create a vision of this man as he might have been was a great pull. And so Simon turned away from his usual military fare and began to explore the world of a man who was more politician and patriot than warrior and hero.

Gordon’s writing career has largely centred on the late Roman Empire and the period that led to the collapse of the West and the continuation of the ‘Byzantine’ Empire in the East. Many point to Constantine’s day as the definitive starting point for that period. But in his reading, Gordon has long been unsatisfied by the polarised opinion surrounding Constantine: he was either a saint, the thirteenth apostle who bestowed Christianity upon the world of Late Antiquity… or he was a political monster, bloodthirsty, manipulative, ambitious and determined to make the world his own. But no man is all good or all evil. This was the proverbial gauntlet for Gordon – to explore the fog in between these two extremes, to mine the scant anecdotes and scraps of evidence we have for Constantine the person and to truly understand his motivations.

Armed with their story plan, their burning enthusiasm to tell the tale of these two giants of history, Gordon and Simon set to work. The story of Constantine and Maxentius begins with ‘Sons of Rome’.