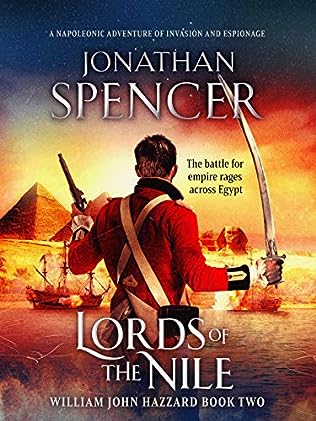 Lords of the Nile

(2020)
(The second book in the William John Hazzard series)

The battle for Empire rages across Egypt

Malta, June 1798. Captured by the French after hurling himself into the enemy ranks, Hazzard is now a prisoner of Bonaparte and his nemesis, the spy-catcher Derrien. He has, however, uncovered the deadly purpose of Napoleon’s fleet: the conquest of Egypt.

Their bold plan is to cut open the ancient Suez Canal and then sail through the Red Sea to attack India, the jewel in England’s crown.

As Napoleon’s great armada prepares to sail, Nelson’s fleet, still scouring the Mediterranean in vain for the French, is nowhere to be seen. If Hazzard can’t find a way to stop this – no-one will.

But help comes from an unexpected quarter – the missing Admiralty agent…

From the shores of Malta to the truly epic encounter of the Battle of the Nile – this is the explosive beginning of the French invasion of Egypt. Never give up the boat.

This is the second book in this stupendous new series and in some ways the harder book, Napoleon’s Run the first book in the series was such blockbusting start that repeating that impact is extremely difficult, beating it almost impossible… but he did!!

Lords of the Nile is a such breathtaking frenetic plot that it truly does exhaust the reader, I found myself getting faster and faster in my reading, tearing through the pages, only to realise that i was trying to match the pace of  the characters and the plot, it is so immersive you can’t help but be sucked into it, swept away by it, pushed to tears by it and utterly enthralled by it.

In the last few years I’ve picked up a few new authors that have stunned me with the impact of their books and dazzled me with the skill and pace of their stories… Jonathan Spencer is one of the best of these, in two books he now resides as one.. of my “Must read” authors, a drop what you’re doing, or what ever else you are reading and read it now writer.

Hazzard will give Sharpe a run for his money any day, and im sure Jack Lark would be happy to serve with him… my favourite book this year and i’ve read some great ones.

(Excuse the brevity of review…. i have a broken hand … this took ages… 😉