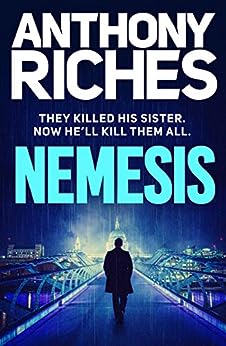 They killed his sister. Now he’ll kill them all.

Mickey Bale is an elite close protection officer. That’s why the Met police has given him the toughest job of all: guarding the Minister of Defence at a moment when Chinese-British relations have hit a deadly boiling point.

And when Mickey’s life isn’t on the line for his work, he’s taking his chances waging war on a powerful London gang family. Their dealer supplied a lethal ecstasy pill to his sister, and Mickey is determined to take them down, one at a time.

But will he get away with it – or will his colleagues in the force realise that the man on an underworld killing spree is one of their own?

Anthony Riches is one of my favourite authors, he is well known for his (Roman) Empire series and its band of soldiers who pull off impossible missions with humour, flair and bloody skill. So when I heard that he had branched out into thrillers I was desperate to read it, and emails flew off to the publisher begging for a copy, if anyone could inject something new and exciting into the genre its Anthony Riches.

Nemesis is set around the life of Mickey Bale an elite protection officer for the Met, this set off a small red flag for me because my girlfriend works for the police and gets very irate if there are “mistakes” in police procedure… she has dismissed many a good read based on basic errors, but reading the first few chapters you could soon see that the author had done plenty of research (not a surprise) and made sure that the authenticity shines through. Mickey Bale is at the top of his game as a protection officer, but he has a past that includes the loss of a family member, and he wants payback.

What I wanted from the book was something, that felt real and totally new, not a new Jack Reacher or Win Lockwood, and I’m glad to say that what we get is new enthralling and pure Anthony Riches, a dark gritty action  thriller with the authors own blend of sardonic irreverent  humour, which works so well in his books and his characters, for me better and more readable and relatable than Jack Reacher.

There are so many thrillers out there that have American / Hollywood action and humour, but this book is pure Brit, in style, humour and action, action that is exciting but in no way over the top, if I had to find any comparison it would be Guy Richie meets the bodyguard (that’s the Richard Madden one… not Kevin Costner), and this book has brilliant TV series written all over it. This is my favorite thriller of this year and the last few years. There is so much more to come from Mickey Bale, and I hope we get to see it soon.