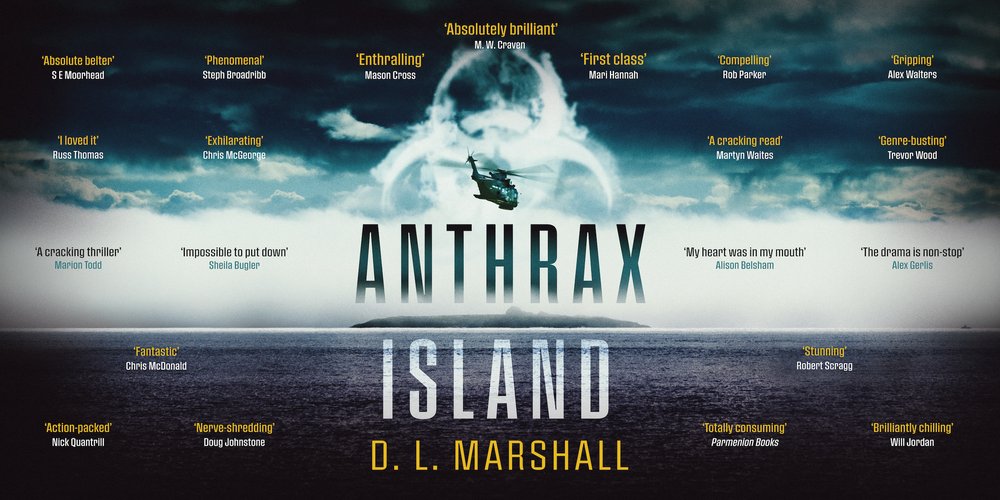 D. L. Marshall was born and raised in Halifax, West Yorkshire. Influenced by the dark industrial architecture, steep wooded valleys, and bleak Pennine moors, he writes thrillers tinged with horror, exploring the impact of geography and isolation. In 2016 he pitched at Bloody Scotland. In 2018 he won a Northern Writers’ Award for his thriller novel Anthrax Island.

FACT: In 1942, in growing desperation at the progress of the war and fearing invasion by the Nazis, the UK government approved biological weapons tests on British soil. Their aim: to perfect an anthrax weapon destined for Germany. They succeeded.

FACT: Though the attack was never launched, the testing ground, Gruinard Island, was left lethally contaminated. It became known as Anthrax Island.

Now government scientists have returned to the island. They become stranded by an equipment failure and so John Tyler is flown in to fix the problem. He quickly discovers there’s more than research going on. When one of the scientists is found impossibly murdered inside a sealed room, Tyler realises he’s trapped with a killer…

Anthrax Island is my first book of 2021 that departs from my normal reading pattern of Historical Fiction, Fantasy Fiction and a trashy action thriller to cleanse the reading palette. Chosen because i liked the cover… nothing more complicated than that.

The book follows John Tyler to a remote island riddled with deadly Anthrax, the reason on the surface is to fix some broken equipment, but this is a cover for his real role which is to find out who murdered the previous tech, and why?

I fully expected to struggle and slog my way through this book, remote crime with minimal action (or so i thought) add to that a dark wet days atmosphere and it can be a little too real and depressing for me, but Anthrax Island grabbed me right from the start, the opening of the book has you survive a Helicopter ride and stormy sea just to arrive, and once you arrive the characters immediately explode at you with their various idiosyncrasies and behavior.

As soon as you are introduced to them you start playing cluedo, it was X with the Y in the Z location, this keeps you guessing and flicking back and forth to check clues and detail. The author has a fantastic style of feeding you details and laying out all the facts for you, dragging you deeper and deeper into the plot, teasing more and more detail as its discovered and analyzed, if you can manage to put the clues and potential motives and opportunity together then you can discern who did it….. only you don’t, I was 30% right, the rest he kept me going right up to the action soaked reveal.

The writing is dark, engaging, utterly atmospheric and totally consuming. i cant wait to read the next book, John Tyler is a great character with so much back story and more to give.