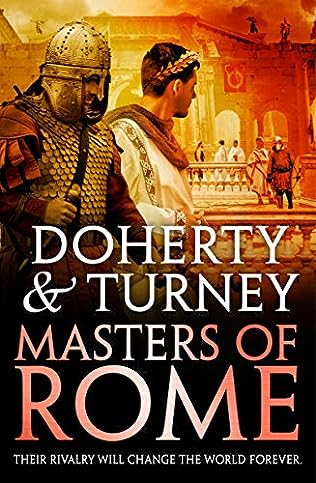 As competition for the imperial throne intensifies, Constantine and Maxentius realise their childhood friendship cannot last. Each man struggles to control their respective quadrant of empire, battered by currents of politics, religion and personal tragedy, threatened by barbarian forces and enemies within.

With their positions becoming at once stronger and more troubled, the strained threads of their friendship begin to unravel. Unfortunate words and misunderstandings finally sever their ties, leaving them as bitter opponents in the greatest game of all, with the throne of Rome the prize.

Book 2 in a series that sees two excellent authors combine their talents and tell the spellbinding story or warring emperors, the back and forth style where each takes one emperor and writes from that perspective was breathtaking in book one, and the pace continues in book 2 with every chapter crafted with immersive skill.

In book 2 we see the continuation of the enmity of Maxentius and Constantine, both still hoping for lost friendship but seeing it swept away by politics and circumstance. Both men hemmed in on all sides by enemies, they must attempt to consolidate their positions and build their armies, they must resolve the internal strife’s of their regions political, religious and personal, to give themselves scope to then try to conquer all and be Emperor of an whole Empire.

This book is the middle book in a trilogy and it does feel like that, all trilogies are a journey and the middle book is the journeyman, the one that takes you from the shocking start to the dramatic conclusion…. that said, both Doherty and Turney manage to add action, thrills, emotion, political and personal turmoil and so much more into this journey, meaning that you the reader are left both satisfied and wanting more by the end.

This like book one is a total triumph of collaboration with both writers bringing their A game to every page.