John Gwynne The Shadow of the Gods (review) 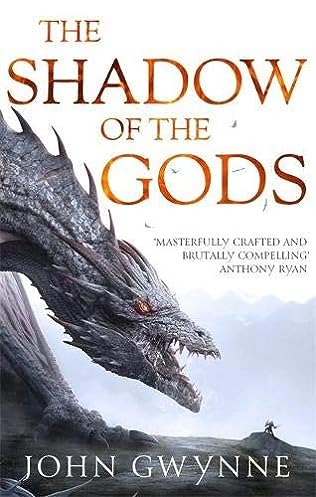 THE GREATEST SAGAS ARE WRITTEN IN BLOOD.

A century has passed since the gods fought and drove themselves to extinction. Now only their bones remain, promising great power to those brave enough to seek them out.

As whispers of war echo across the land of Vigrið, fate follows in the footsteps of three warriors: a huntress on a dangerous quest, a noblewoman pursuing battle fame, and a thrall seeking vengeance among the mercenaries known as the Bloodsworn.

All three will shape the fate of the world as it once more falls under the shadow of the gods.

In a world where the gods have driven themselves to destruction, new societies emerge, built on the bones of the old with remnants of power used to forge kingdoms, Humans rule and enslave those with blood “tainted” by the old gods. The legends and infamy of those gods still wield power over the world and the people in it. John Gwynne introduces us to a Norse style world in post “Ragnarok” times. What would the world look like after the gods had died? Humanity comes back, with all the usual traits, those who want to rule come to the fore, bands of “Oathsworn” men and women live to create their own saga song, to find immortality. Under it all there are those who still revere the old ways and the old gods, even while the world hunts and enslaves those with any hint of god “tainted” blood. Are all the gods really dead if their blood lives on?

John Gwynne over the last 9 years has become one of my favorite fantasy reads, its no longer a will I like his new book its how much will I like it, how much will it live up to the anticipation and the hype? More so with this new book as we arrive in a new world, a new imagined land and people. It will be no surprise to many that he smashes it out of the park with an utterly immersive and blood soaked Norse world.

This story (as his is style) being seen from multiple POV’s as we follow our main cast members Orka, a warrior woman who literally soaks the pages of this book in blood and gore in the search for her son. Varg, who has been enslaved all his life and now he is finally free seeks the answers to the death of his sister, joining “The Bloodsworn” a band of brothers who would die for each other shows him what family is, while he wars with himself to fulfil his oath to the only family he had before, the bloodsworn are the glue in the book for me, full of unique characters and great dialogue and humor. Then there is Elvar, she is a member of the “Battle-Grim” and while their and her introduction is slower than the other POVS you can feel the weave of fate bringing the threads together, you know that while its a slower steadier POV that it and her importance will soon come to the fore and explode across the plot. John Gwynne is the master of pulling threads together, making you invested in each character and killing any of them at a whim, you know that nothing and no one is safe, but that he will pull the whole thing together in breathtaking fashion.

While Johns world of the faithful and the fallen is stunning, this new world surpasses it, I can only feel that its his love of all things Norse, his intimate knowledge with the battle gear and his skill as a skald is what has allowed him to create something so utterly immersive. I know that there are readers out there that can be put off by the phrase “blood-soaked”… but honestly every single act and action is in keeping with the plot, this isn’t gratuitous violence, its the world they inhabit and what’s needed to stay alive and keep honour and oaths intact.

I seem to have spent the whole of 2021 reading better and better books. I think I have now reached the pinnacle of skill and story telling with this book and Miles Camerons Atrifact Space.

It doesn’t get a higher recommend than this, this is the start of something truly special, a book with a remorseless pace, cliff hangers aplenty, stunning world building and characters. You will find your own favorites in the book, for me its Varg and the Bloodsworn. And i cannot wait to wade through the blood and mayhem of book 2.

Im now off for a well earned book hangover….