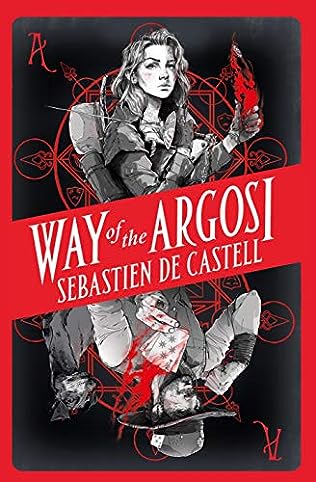 Ten year old Ferius Parfax has a simple plan: kill every last inhabitant of the spell-gifted nation that destroyed her people, starting with the man who murdered her parents. Killing mages is a difficult business, of course, so Ferius undertakes to study the ways of the Argosi: the loosely-knit tribe of tricksters known for getting the better of even the most powerful of spellcasters. But the Argosi have a price for their teachings, and by the time Ferius learns what it is, it may be too late.

When Sebastian hit my TBR pile in 2014 it was as one of the most anticipated books of the year, and the Greatcoats series became one of my all time favourite series. So its very bemusing for me (still) that somehow i became distracted by life in 2017 and 2018 and missed the start of the SpellSlinger series and so fell behind and decided to shelve the series (while still collecting it) until it was done… Sebastian went one better than that for me (im sure he did it just for me…. just didnt realise it at the time) and released a prequel this year with Way of the Argosi and now he has me hooked again and i have a justified TBR pile reason to read the whole series.

Whilst the characters felt different and the place had changed and the back and forth banter of the greatcoats was no longer there, the underlying writing style and voice of the author, that had some entranced me was all still there and it was less that ten pages before i was hooked for good. The book at 384 pages should have been a couple of days of fun reading , but as it turned out it was one long solid stint and uncounted cups of tea in an utterly engrossing read.

Its impossible not to become emotionally attached to the lead character Ferius, to root for her survival, she has been hunted from childhood across the continent, abused, attacked, starved and near death and certainly a little crazy, she wants and needs revenge, yet into her life comes Durrel Brown, and a new way of looking at the world and what has happened to her, the changing perspectives were brilliantly done, the little plot redirections subtle and surprising, and the characters engaging, even the ones you wanted to hate. If the prequel is a masterpiece i cannot now wait to dive into the rest of the Spellslinger series….i Just need to get cracking because my most anticipated book of the year comes out from this master writer in Sept in the form of Play of Shadows