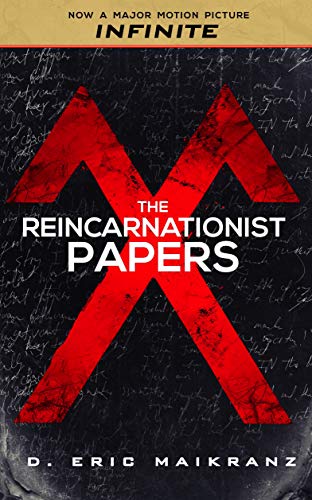 “Haunted by memories of two past lives, a troubled young man stumbles upon a centuries-old secret society of similar individuals and dares to join their ranks.”

Discovered in an antique store in Rome at the turn of the millennium, The Reincarnationist Papers offers a tantalizing glimpse into the Cognomina, a secret society of people who possess total recall of their past lives.
Evan Michaels struggles with being different, with having the complete memories of two other people who lived sequentially before him. He fights loneliness and believes his ‘condition’ is unique until he meets Poppy. She recognizes his struggle because she has the same ‘condition’, except that she is much older, remembering back seven consecutive lives. But there is something else she must share with Evan – she is a member of a secret society of others like them. They are, in effect, near immortals – compiling experiences and skills over lifetimes into near superhuman abilities that they have used to drive history toward their own agenda on a longer timeline.
Through Poppy, Evan is invited into the Cognomina but he must decide if he can face their tests before entering this new mysterious society as their equal.

I love a good thriller especially mixed with a hefty dose of the fantastical, which in this case is reincarnation. Our main character Evan Michaels is a man that life has not treated well and he has responded in kind, living day to day he is haunted by memories that are not his own, a man alone, lost and wondering if he is insane, but also confused by the fact that his memories appear to be real. Until one day he blunders into Poppy, another person like himself, but more than him she knows who and what he is and belongs to a small ancient group of people, a secret order of reincarnated people…

The book is engaging, with a steady pace and a wonderful “what if” premise, at times it does have a tendency to wander off on a philosophical ramble, but this book at times needs that reflection, and its always carried through with a characters differing perspective of why they are there, why they are immortal and what it means, interestingly after hundreds of years many of them still have such divergent perspectives on the world and their place in it. A great concept… that will i think transfer to film well.

This is due to be released as a major Motion Picture in 2021, starring Mark Wahlberg under the title “Infinite”.

I enjoyed the book, i’m very intrigued to see the film.