A pseudonym used by Douglas Jackson
James Douglas is the pen name of an author of successful historical fiction novels.
Douglas Jackson was born in Jedburgh in the Scottish Borders in the summer of 1956. Educated at Parkside Primary School and Jedburgh Grammar School, he left three weeks before his 16th birthday with six O levels and no idea what he was going to do with the rest of his life.
Doug now lives in Bridge of Allan, a lovely village on the doorstep of the Trossachs and is married to wife Alison. They have three children who never fail to make him terribly proud.
He enjoys watching rugby, and finds life at its most relaxing by the river with a fly fishing rod in my hand, although he seldom disturbs many fish. 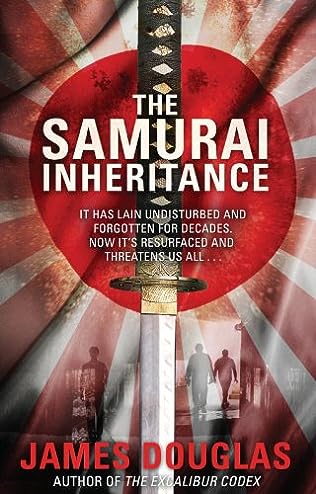 April 1943 – A Mitsubishi transport plane plunges from the sky over the island of Bougainville. On board is Admiral Isoruku Yamamoto, architect of the Japanese attack on Pearl Harbor. In a document case chained to his wrist is the greatest secret of the Second World War – a revelation with the potential to change the world if it is ever revealed.

December 2011 – Art recovery expert Jamie Saintclair celebrates the return of a Vermeer painting to its rightful owner, and the day turns even better when he’s offered a lucrative commission. Not much can surprise Jamie, but he blinks when mining tycoon Keith Devlin reveals the object he wants him to find. How did the preserved head of a Solomon Island warrior end up in a German museum? And how is he supposed to discover what happened to it in 1945?

The search takes Jamie from Berlin to Tokyo and with every turn the significance of the Bougainville skull becomes ever greater. Soon he realizes he’s become involved in something much more important than finding a lost piece of history. Three thousand miles away, the answer lies in airless jungles that have already swallowed up one terrible conflict and are now being torn by a war the world isn’t meant to know about . . .

I have to admit that i have held on to this book for a couple of years. As soon as i discovered it would be the last Jamie Saintclaire i decided to save it for a rainy day thriller, when i needed something special.

I wasn’t disappointed, James Douglas just got better and better with this series, a series that had so much more scope. This time our hero is dragged into danger unwittingly, a small job that turns out to be not everything he was told. Jamie is a little older a little wiser and less wet behind the ears, the extra calmness plays well in the plot of this book.

As always there is the time hope element to the plot which pulls you back and forth in time, and drives the plot forward at a furious pace as you the reader try to race to the next element of the story in each timeline.

Ultimately the pace and the brilliant characterisation means that the book is over before you know it or want it, and with a satisfying dramatic conclusion, and yet not once does the plot or action lean to the impossible or unbelievable as many action books can.

I shake my head in despair that this series stopped…. truly a massive shame and loss. But for those that have not read any, this is a set of 4 books to not miss.