Dave Wragg really got into writing stories just as he finished English GCSE, then took about twenty years to get back to it. In the meantime, he studied software engineering, worked in global shipping and technical consultancy, and once spent a year in the Foreign Office ‘hiding in the basement’.

He currently does Software Odd Jobs around central London. In his vanishingly rare free time (when not working, writing, or enjoying the fruits of parenthood), he tries to consume as much digital entertainment as possible, as well as reading genre fiction and enjoying the odd board game. Some of them are very odd indeed. 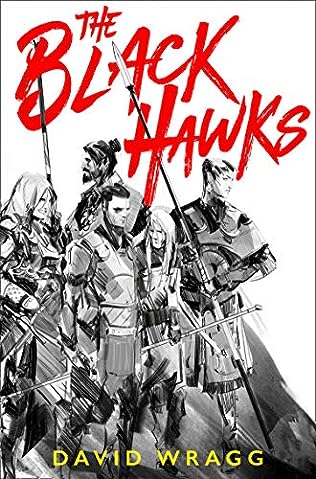 Life as a knight is not what Vedren Chel imagined. Bound by oath to a dead-end job in the service of a lazy step-uncle, Chel no longer dreams of glory – he dreams of going home.

When invaders throw the kingdom into turmoil, Chel finds opportunity in the chaos: if he escorts a stranded prince to safety, Chel will be released from his oath.

All he has to do is drag the brat from one side of the country to the other, through war and wilderness, chased all the way by ruthless assassins.

With killers on your trail, you need killers watching your back. You need the Black Hawk Company – mercenaries, fighters without equal, a squabbling, scrapping pack of rogues.

Prepare to join the Black Hawks.

I was sold on this book as soon as i saw the cover, because you certainly do tell a book by the cover, why else do you pick it up in the first place!!? The art work on this one is just brilliant.

When i started to read it i had a wobble, it felt a little slow, but i think may have been more my issue getting my head around the society and the hierarchy, because the story starts with a punch and keeps on going until you’re either a fan or a bloody pulp.

The main character has a hint of Mark Lawrence and the reluctant Jal, but when doing the right thing is needed Chel goes forward not in the opposite direction, there is certainly a hint of Nicholas Eames bloody rose, with Chel like Tam learning new skills from the highly trained mercenaries, with dark humour, fast violence and a cynical view of their world. These guys fight dirty, fight hard and fast and run away when they need to, this is a business not a quest.

I loved the characters, no matter how dark and devious they got there was always something new about them, the story brought something new to the table which i think gets harder every year. When you add in cannibals, assassins, back stabbings, lies and misdirection… you end up with an awesome mix.

Highly recommend this book, its great fun and really fast….