Ed McDonald has spent many years dancing between different professions, cities and countries, but the only thing any of them share in common is that they have allowed him enough free time to write. He currently lives with his wife in London, a city that provides him with constant inspiration, where he works as a university lecturer. When he’s not grading essays or wrangling with misbehaving plot lines he can usually be found fencing with longswords, rapiers and pollaxes.

Ed’s debut novel Blackwing is the first part of The Raven’s Mark trilogy. Blackwing will be published on July 20th 2017 by Gollancz in the UK, and October 2017 by Ace in the United States. German, Spanish, French, Hungariann and Russian translations will be available from 2018. 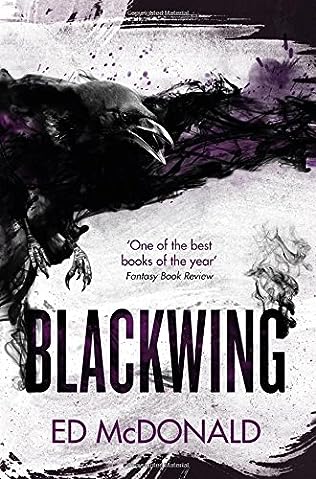 The republic faces annihilation, despite the vigilance of Galharrow’s Blackwings. When a raven tattoo rips itself from his arm to deliver a desperate message, Galharrow and a mysterious noblewoman must investigate a long dead sorcerer’s legacy. But there is a conspiracy within the citadel: traitors, flesh-eaters and the ghosts of the wastelands seek to destroy them, but if they cannot solve the ancient wizard’s paradox, the Deep Kings will walk the earth again, and all will be lost.

The war with the Eastern Empire ended in stalemate some 80 years ago, thanks to Nall’s Engine, a wizard-crafted weapon so powerful even the Deep Kings feared it. The strike of the Engine created the Misery – a wasteland full of ghosts and corrupted magic that now forms a no-man’s-land along the frontier. But when Galharrow investigates a frontier fortress, he discovers complacency bordering on treason: then the walls are stormed, and the Engine fails to launch.

Galharrow escapes only because of the preternatural magical power of the noblewoman he was supposed to be protecting. Together they race to the capital to unmask the traitors and restore the republic’s defences. Far across the Misery, a vast army is on the move, as the Empire prepares to call the republic’s bluff.

Blackwing is a book about magic, swords and power.

It’s also a story about a relationship, love, and the need for closure. Hopefully, a reader will feel that the way that the characters interact over the course of the book is believable, given the situations that they find themselves in, and the way that life has treated them before. I wanted to write a relationship narrative that more accurately mirrors the way that I feel that adults behave. The key characters aren’t 15 years old, they’re people who’ve experienced life, and I wanted them to behave like those kinds of people. I also wanted to show a man with difficult feelings not acting like a complete and utter pillock.

When I was growing up in the 1990s, I learned about relationships from watching Friends on the TV. The best bit of Friends was Ross and Rachel and their on/off status, because it got across a lot of feeling. But, it’s only with hindsight that I can look back at Friends and see how damaging it was to my own sexual identity as a young man learning about how to behave around women, what women wanted from a heterosexual relationship, and how relationships form.

Friends eventually turned into British sitcom Coupling, then How I Met Your Mother (it’s incredible how many plots got reused) and then the same issues appear in Rules of Engagement and more besides. There’s an easy set of jokes that can be made that go like so:

Woman suggests remote possibility of sex. Man loses his head and falls over trying to get to the bedroom.

The message in these shows is that men are sex-obsessed and willing to do anything to get into a woman’s knickers. This wasn’t my experience of being a teen/adult male, and never has been. But I always kind of felt that to be a real man, that’s how I ought to feel. Even after I settled into a stable relationship in my late twenties, I felt that I had to be primed and ready to go at the shortest notice. It has taken a lot of reflection and honesty to realise that I’m not an over-inflated balloon ready to explode. A real man can barely control himself, right?

There’s a lot that’s wrong with this media picture. It tells men that it’s OK to be only just in control. It tells men that women are the gatekeepers and that they control everything about the flow of sex in a man’s life. It tells them that society expects them to be ‘horn dogs’ and that to behave like that is OK. It’s all very toxic. This is so often portrayed in fantasy books as well. A very silly bit in one book by an author that I greatly respect in all other ways involves a (mild mannered, polite, kind) character throws himself into a patch of stinging nettles because he’s just so horny. The villains of most books are portrayed in the same manner, and grimdark is often especially blatant for it. We absorb the messages that we read. We emulate our heroes. Getting this stuff right is important.

The second, opposite way that these stories lie to us about relationships is that they tell us that The Changing Friendzone is a real thing. It’s the idea that if you like someone, and they don’t fancy you, that their feelings will change over time, as long as someone performs lots of small acts of kindness. All of the men I grew up with at school seemed to believe this as well. Why not? We identified with Ross. It’s the plot of every rom-com out there. When I got to university, everyone believed it there too. But then, through life, I’ve yet to see a single example of this play out. I wasted years pining over girls that I thought I loved, imagining that they’d somehow change their minds about me if I was just a good friend for long enough. Fantasy is very guilty of this. One of the biggest books in the genre is effectively a big friend-zone story. It’s a device to draw out a romance into a long and tortured ordeal, where we can root for the characters over time. Maybe we enjoy this story because secretly we’ve all loved a friend in this way. But I’d so much rather read a story where someone goes through this and then meets someone that actually likes them instead.

To me, it’s all a little disingenuous. Our expectations of reality are affected by the stories that are told to us, and as an author, I wanted to write a relationship that I felt better matched my experiences of the way that experienced adults behave. People in their thirties are both honest and dishonest. Love is selfish; it’s also about giving. It’s hard, and it hurts at times, and you’re not always sure that you want it, even when you can’t bear to let it go. It takes into account that there are other things going on in life, and that much as you might want something, there are always going to be other concerns to get in the way.

For me, the human element of a fantasy story is what makes all those swords, magic blasts and doomsday weapons matter. Hopefully I pulled it off.