Edward Cox began writing stories at school as a way to pass time in boring lessons. It was a hobby he dabbled with until the late 80’s when he discovered the works of David Gemmell, which not only cemented his love of fantasy but also encouraged a hobby to become something much more serious.

With his first short story published in 2000, Edward spent much of the next decade earning a BA 1st class with honours in creative writing, and a Master degree in the same subject. He then went on to teach creative writing at the University of Bedfordshire. During the 2000’s he published a host of short stories with the smaller presses of America, where he also worked as a reviewer.

Currently living in Essex with his wife and daughter, Edward is mostly surrounded by fine greenery and spiders the size of his hand. The Relic Guild is his first completed novel, and it is the result of more than ten years of obsessive writing. 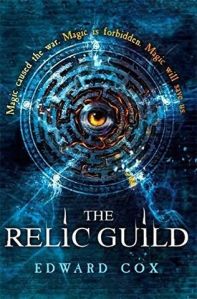 Magic caused the war. Magic is forbidden. Magic will save us.

It was said the Labyrinth had once been the great meeting place, a sprawling city at the heart of an endless maze where a million humans hosted the Houses of the Aelfir. The Aelfir who had brought trade and riches, and a future full of promise. But when the Thaumaturgists, overlords of human and Aelfir alike, went to war, everything was ruined and the Labyrinth became an abandoned forbidden zone, where humans were trapped behind boundary walls 100 feet high.

Now the Aelfir are a distant memory and the Thaumaturgists have faded into myth. Young Clara struggles to survive in a dangerous and dysfunctional city, where eyes are keen, nights are long, and the use of magic is punishable by death. She hides in the shadows, fearful that someone will discover she is touched by magic. She knows her days are numbered. But when a strange man named Fabian Moor returns to the Labyrinth, Clara learns that magic serves a higher purpose and that some myths are much more deadly in the flesh.

The only people Clara can trust are the Relic Guild, a secret band of magickers sworn to protect the Labyrinth. But the Relic Guild are now too few. To truly defeat their old nemesis Moor, mightier help will be required. To save the Labyrinth – and the lives of one million humans – Clara and the Relic Guild must find a way to contact the worlds beyond their walls.

Debut novels are always a treat for me, they are among of my favourite reads in the year, not because they are often the best books, but because they are the hope for the future of writing in their genre and in some cases across genres.

Reading Edward Cox’s bio was straight away a draw for me, a man who enjoys Gemmell, who’s love for reading and fantasy grew from my own personal all-time favourite writer. This fills me with hope as a reader, but also dread, will they try to be DG? Or will they be unique and exemplify his best traits?

Relic Guild shows a bit of a mix, the author clearly shows a great skill for characterisation, he has spent a great deal of time weaving the plot so that the reader is drip fed the importance of the plot while surrounded by the adventure. He incorporates one of Gemmell’s best character traits the flawed hero, Old Man Sam being a mix of deadly Bounty hunter, a man who can kill without compunction, who is utterly remorseless if he needs to be, a man of legend (see my sneaky Gemmell reference) this is mixed with his non nonsense dialogue, a demeanour that holds you at bay but at the same time makes you want to know more about this man who has truly lived his life. As with DG you need to blend this type of character with others who offer humour, genuine laugh out loud moments, this is embodied well in Hamir the necromancer, a man with a sense of humour after my own heart, at times a darkly humours little swine, and there are many many more well thought out well fashioned characters, making you want to be part of the story, not an observer.

One of the truly interesting styles in the book was the introduction of timeslip, the story being told in 2 time periods, I know this device is regularly used in thrillers, but I cant think of another Fantasy that uses it (im sure you can all point out how wrong I am). Its this that made me look further that the style and realise, that while the author uses some of the best parts of Gemmells style he has brought something new, a little bit of darkness of Grim Dark, a bit of the flawed hero, the pace of a good thriller, the western style of Abercrombies Red Country / John Horners Incorruptibles mixed with that little dose of horror and blended it into a wonderful unique tale. My only criticism would be a slight tendancy to get wordy, but only slight and for a debut it’s a cracking read, im simply stunned it’s a debut.

This truly is a do not miss fantasy title for 2014, right up there with the stunning Incorruptibles and Traitors Blade