Mike Brooks was born in Ipswich, England, and moved to Nottingham, England to study at Nottingham Trent University and never left. He started to write stories and novels in childhood, has worked for a homelessness charity since 2004 and when not working or writing he goes walking in the Peak District, sings and plays guitar in a punk band, and DJs wherever anyone will tolerate him. He is married, and has two cats and a snake.

(2021)
(The first book in the God-King Chronicles series) 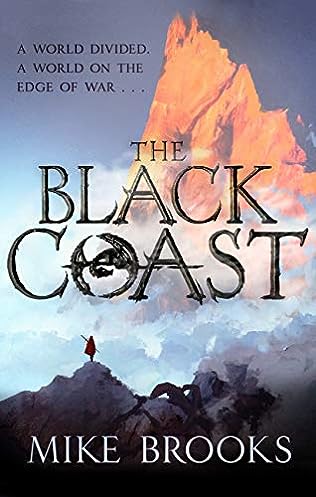 WAR DRAGONS.
FEARSOME RAIDERS.
A DAEMONIC WARLORD ON THE RISE.

When the citizens of Black Keep see ships on the horizon, terror takes them because they know who is coming: for generations, the keep has been raided by the fearsome clanspeople of Tjakorsha. Saddling their war dragons, Black Keep’s warriors rush to defend their home only to discover that the clanspeople have not come to pillage at all. Driven from their own land by a daemonic despot who prophesises the end of the world, the raiders come in search of a new home . . .

Meanwhile the wider continent of Narida is lurching toward war. Black Keep is about to be caught in the crossfire – if only its new mismatched society can survive.

Dragons , Raiders, Warlords… reading this book was always a given. He’s also a new author for me and so an unknown, but Petrik Leo has a bad habit of shoving new books under my nose and adding to my already massive TBR. (cheers Leo).

As a read i started with that new author trepidation and also some reticence about the very original approach to non gender specific pronouns and their use depending on culture, it took a little getting used to. That  approach mixed with a raider culture that was very Norse and a mainland culture that’s very Japanese, with the Sars taking the role of Samurai, it was a veritable hodgepodge of a cast and culture.

But it was a cast and culture set that became more and more interesting, with lots of other questions raised, raised well and covered brilliantly esp sexuality. I’ve found in fantasy there are quick reads, the action adventure fun with a fairly prescriptive cast just set in a different landscape, and there are books that while they entertain they make you think, and i’m a fan of both in their right time (thats my reading mood). This book is certainly in the latter, make you think category, one that immerses you in a new brilliantly imagined culture and land, where the throwing away of societal norms is easier, allowing an author to shine a light on prejudices without offending people who might normally instantly put up walls about a subject, and through that process the author educates the reader as well as entertains.   I may be wrong, but that’s my view of the book and the coming series, and its all wrapped up in an amazing story, one i hugely enjoyed and really want to dive into again.