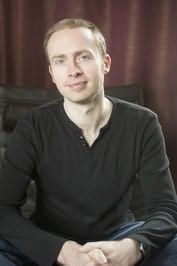 Peter Newman co-writes the Hugo nominated Tea and Jeopardy podcast and is also the voice of the butler, Latimer.

Years have passed since the Vagrant journeyed to the Shining City, Vesper in arm and Gamma’s sword in hand.

Since then the world has changed. Vesper, following the footsteps of her father, journeyed to the breach and closed the tear between worlds, protecting the last of humanity, but also trapping the infernal horde and all those that fell to its corruptions: willing or otherwise.

In this new age it is Vesper who leads the charge towards unity and peace, with seemingly nothing standing between the world and a bright new future.

That is until eyes open.

And The Seven awaken

I find that Peter Newman breaks the mould a bit with this series, as he makes me break my reading rules. He somehow convinced me to read Malice before Vagrant…. i know shocking! Yet i found the book could indeed be read as a stand alone. I’m not sure i feel that The Seven could be, there is too much you need to know from before to invest you in the book/ series to just take a dive into this book. I’m also not sure where i would truly pigeon hole this book genre wise… is it really Fantasy? or Dystopian? or Scifi? (i hate Scifi) or just a blend of all?

As with the previous two books, the story is quite dark, gritty and immersive. Its not a book i can read in my normal style of pick up and put down, it needs to be read in large swathes of reading time to truly enter the world and the spirit of the story. I find for me at times it (like Malice) can be a little too dark and a smidgen too depressing…but that said i think its a testament to the writing that it elicits a range of emotions across the spectrum and makes me want to keep reading. It has that ability to give you edge of the seat tension as well as doldrum like darkness and all the time keeping you in step with the wonderful characters of the book.

In my last review i wrote : “The major characters don’t require major depth, in fact they seem to start out shells ready to be filled, and grow as the book progresses, as do the variations of creatures that now inhabit the world.”

Over the course of Malice, Vagrant and the City and now the Seven, Peter Newman has more than filled the shells of these characters, his world has blossomed from its dark beginnings giving the reader such a rich kaleidoscope for the imagination and a truly original tale that i dare any reader to not enjoy and not be utterly drawn in by his world and the people who inhabit it.

Peter Newman co-writes the Hugo nominated Tea and Jeopardy podcast and is also the voice of the butler, Latimer. His debut fantasy novel, The Vagrant was published by Harper Voyager on April 23rd 2015. 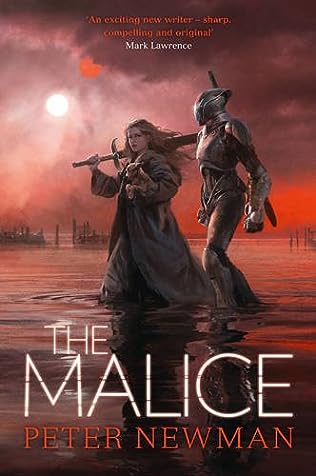 In the south, the Breach stirs. Gamma’s sword, the Malice, wakes, calling to be taken to battle once more. But the Vagrant has found a home now, made a life, and so he turns his back, ignoring its call. The sword cries out, frustrated, until another answers. Her name is Vesper.

When i received a review copy of The Malice i had not read the first book in the series and i considered the fact that i would want to, (i never read a book part way through a series), so instead i broke that rule. I wanted to truly see of a book in a series could work as a stand alone. I delighted to say that this book works beautifully as a standalone novel. Unlike many series the book isn’t riddled with allusions to previous books and occurrences a new reader knows nothing about.

I’m hugely impressed with the world building/ descriptive in a 2nd book, the author has taken time to ensure a new reader enjoys the experience as much as anyone who has read his previous book. As fantasy books go its a slow burn, a steady introduction to characters, the world and the mission. The timeslip between the cause of the worlds woes and the present day is the winner for me, the two threads helping to pull together the entire plot of the book.

The major characters don’t require major depth, in fact they seem to start out shells ready to be filled, and grow as the book progresses, as do the variations of creatures that now inhabit the world.

by the end of the book , and what and ending, i was left wanting more, wondering how soon i could fit in the first book in the series and understand Vespers father (The Vagrant) , and would book 3 include them both? and just what could be more dangerous than the yearning?… and i cant wait to find out.

Many new writers i hear about are so much hype and fail to measure up, but in the case of Peter Newman and The Malice I‘m really pleased to say the hype has substance and talent, this is a series not to be missed.

On the other side of the world a man stands by a window, his amber eyes intent on a small figure outside. Her name is Vesper. She is doing nothing of note and yet the man smiles as he watches her, her very existence comforting, warming like the suns.

For a long time he was alone and lost, a vagrant. Now he has a home, a family and more goats than he knows what to do with. It is a good life.

And yet lately a shadow seems to loom around the corner, a hint of coming disquiet. His home is built outside the Shining City, a step removed from people and politics and the expectations of others. News has to battle to get to his door. This is no accident.

Behind him, the sword begins to tremble, rocking back and forth, folded wings tip-tapping on the wall, but the eye remains closed. For years it has slept, deeply, peacefully, a quiet companion.

He turns to it, smile sliding from his face. Absently, he scratches at old scars, on his thigh, his face, the side of his head. It has taken years to heal. Years of gentle work to make a new life, a safe space for those he loves.

His attention goes back to Vesper, who chats idly with the goats. Slowly, he returns to work but the tapping of the sword continues, like a thorn in his boot, needling, never quite out of mind. Lips form a line. At his sides, fists clench.

The sword is taken to his room, the door shut.

It is not enough.

He wraps the sword, making a thick bed of fabric for it, muffling the sounds it makes.

It is not enough.

Though it no longer bumps against the wall, the sword’s unease comes out in half made notes, little things that catch on the edges of his soul.

He finds himself standing at the door, staring, one hand starting to open it, to reach out to the sleeping sword. It would be a small matter to lift it, to wake it once more, to …

‘What are you doing?’

He starts, turns to find Vesper standing there, face bright. With her, every day is a marvel. How tall she has become! How reminiscent of her mother.

Her head tilts to one side, trying to see past him. ‘What are you doing?’

He musters a half-smile, shrugs.

‘What’s in there? I thought I heard a noise. Can I have a look? Is it an animal? It sounded unhappy. Can I see?’

He waves the questions away and puts a gentle hand on her shoulder, moving away from the room and taking her with him.

Later, when other distractions have led the girl away, he returns to the room with tougher materials and a box.

But it is not enough.