Robert V. S. Redick’s Chathrand Voyage Quartet (The Red Wolf Conspiracy and sequels) is among the most beloved and critically acclaimed epic fantasy series of recent years. A social and environmental justice consultant, he has worked in Indonesia, Argentina, Colombia and many other countries. His new fantasy series, The Fire Sacraments, will be published by Talos Press. He lives with his partner in Western Massachusetts.

Master Assassins  (2018)
(The first book in the Fire Sacraments series) 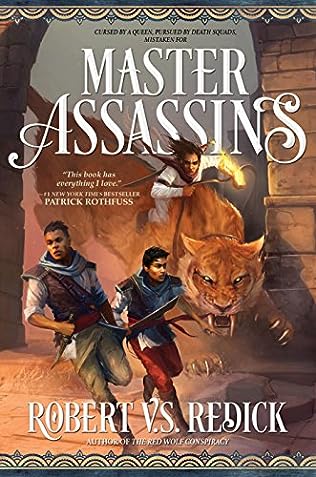 Two village boys mistaken for assassins become the decisive figures in the battle for a continent in the thrilling new desert-based epic fantasy by the author of The Red Wolf Conspiracy.

Kandri Hinjuman was never meant to be a soldier. His brother Mektu was never meant for this world. Rivals since childhood, they are drafted into a horrific war led by a madwoman-Prophet, and survive each day only by hiding their disbelief. Kandri is good at blending in, but Mektu is hopeless: impulsive, erratic – and certain that a demon is stalking him. Is this madness or a second sense? Either way, Kandri knows that Mektu’s antics will land them both in early graves.

But all bets are off when the brothers’ simmering feud explodes into violence, and holy blood is spilled. Kandri and Mektu are taken for contract killers and must flee for their lives – to the one place where they can hope to disappear: the sprawling desert known as the Land that Eats Men. In this eerie wilderness, the terrain is as deadly as the monsters, ghouls, and traffickers in human flesh. Here the brothers find strange allies: an aging warlord, a desert nomad searching for her family, a lethal child-soldier still in her teens. They also find themselves in possession of a secret that could bring peace to the continent of Urrath. Or unthinkable carnage.

On their heels are the Prophet’s death squads. Ahead lie warring armies, sandstorms, evil spirits and the deeper evil of human greed. But hope beckons as well – if the “Master Assassins” can expose the lie that has made them the world’s most wanted men.

I had heard many many great things about this book, people i know with the right sort of taste (my taste) in books were highly praising this book, so needless to say i went into this book with very high expectations.

Once i reached about 50 pages in i had some concerns, the book had lots of quality, but i didn’t see this amazing sparkle that everyone was waxing lyrical about, but … well one of those people was Mark Lawrence, i’m going to trust him and persevere was my thinking.

So night after night i plugged away at this book and very soon i wasn’t looking for the magic i was engrossed in it. A world so very new, so bleak and deadly and yet so captivating that you the reader cannot help but be dragged into the mire with our two very unlucky (or are they really lucky?) brothers.

As with all truly great books its not really the world that is the genius (but it helps), although the author for this book truly goes beyond Epic fantasy in his world building, But its the Characters that define great and in this book they are so flawed so unique, so different to anything i have read before. The rising of the underclass behind popular religion, twisted to a zealotry ideology, yet showing that many of the zealots are just people dragged along, to eat, survive and live in a country ruled in such a way, (not everyone is a terrorist… sorry Zealot). Our brothers have so much mystery surrounding them, their pasts, and their loves and is one of the possessed or just plain crazy, all of this taking place at the same time as a helter skelter escape plan that is just plain insanity personified.

I  read this book on ebook format so had no idea what the page count was, and guessed at something around 800, and was shocked to find it was only 460, that’s not it dragged on, but so very much detail and action is packed into a book of this size. (stunned)

So i add my voice to the others that have gone before…… BUY THIS BOOK!! its really really good.