Stella Gemmell has a degree in politics and is a journalist. She was married to the internationally acclaimed and bestselling fantasy novelist David Gemmell and worked with him on his three ‘Troy’ novels, completing the final book, Troy: Fall of Kings, following his death in 2006. She lives and writes in an old rectory in East Sussex. The City is her first solo novel. 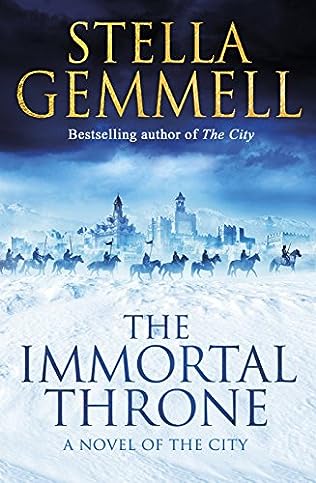 No one is safe, and no one is to be trusted as the bloody war that began in Stella Gemmell’s The City continues…

The dreaded emperor is dead. The successor to the throne is his nemesis, Archange. Many hope her reign will usher in a new era of freedom and stability. Soon however, word arises of a massive army gathering in the shadows of the north. They are eager to lay waste to the City and annihilate anyone – man, woman, or child – within it.

Yet just as the swords clang in fields wet with the blood of warriors, family feuds, ancient rivalries, and political battles rage on within the cold stone walls of the City. A hero must rise up and restore the peace before anything left to fight for is consumed by the madness.

One of the hardest things to do when reading this series is to put aside the name Gemmell, Stella Gemmell is a writer of her own type, her own status and skill and a style unique to herself. Once i absorbed that fact and stopped looking for David Gemmell in the writing i truly found the wonder of this new writer.

As with Book one of this series i have mixed opinions of this second book.

The pace is slow, the direction is often flighty, and you need to be committed to get to the end. (my advice is set aside a weekend to read this)

The prose is fantastic, the characters imagined in such intricate detail and realism that you cannot fail to be sucked in, the world drawn in such colorful and dramatic sweeping majestic intricacy  that as a reader you are transported to the city.

What truly sets this series apart for me is the utter lack of any side for good, the whole tale of the city is told from multiple POV, from threads in a tale, each with an individual perspective, but lacking a hero and a villain, each with a motive and a drive to achieve a personal aim or ambition. The book is personal to each and every character giving it a sense of realism missing from to many books in the genre.

Stella Gemmell with Immortal Throne has solidified herself as a major new voice in the Fantasy genre, there is more to come from this world and i for one with be at the front of the queue to read it.