Tad Williams: The Heart of What Was Lost: A Novel of Osten Ard (Memory, Sorrow & Thorn) Review.

Tad Williams is a California-based fantasy superstar. His genre-creating (and genre-busting) books have sold tens of millions worldwide. His considerable output of epic fantasy and epic science-fiction series, fantastical stories of all kinds, urban fantasy novels, comics, scripts, etc., have strongly influenced a generation of writers. Tad always has several secret projects on the go. 2016 will see the debut of a number of them; March 2017 brings ‘The Witchwood Crown’, the first volume in the long-awaited return to the world of the ‘Memory, Sorrow & Thorn’ novels. Tad and his family live in the Santa Cruz mountains in a suitably strange and beautiful house. 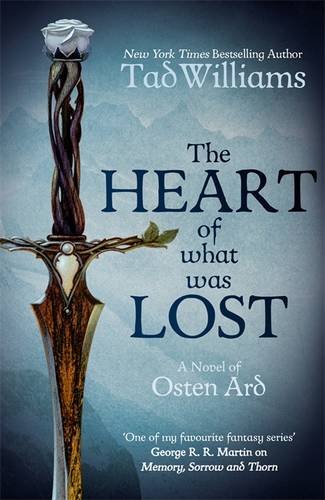 The world was nearly destroyed, but now knows hope again. At the end of Memory, Sorrow, and Thorn, Ineluki the Storm King, an undead spirit of horrifying, demonic power, came within moments of stopping Time itself and obliterating humankind.

He was defeated by a coalition of mortal men and women joined by his own deathless descendants, the Sithi. In the wake of the Storm King’s fall, Ineluki’s loyal minions, the Norns, retreat north to Nakkiga, an ancient citadel which holds a priceless artefact known as The Heart of What Was Lost.

They are pursued by the army of Duke Isgrimnur who is determined to wipe out the Norns for all time.
The two armies will soon clash in a battle so strange and deadly, so wracked with dark enchant­ment, that it threatens to destroy not just one side but quite possibly all.

Memory Sorrow and Thorn forms a seminal part of my reading life and direction. I stumbled across The Dragonbone chair in 1990 when i had just become a single parent. I was trapped indoors with nappies, and all the other new baby things, it was still in the era of 4 channels of nothing on TV and only so many videos to watch. I was a huge fan of David Gemmell, and was branching out into other authors, but i was far from a huge reader. This Tad Williams series broke open mew worlds, new ideas and new opportunities. It led to reading the Many Colored Land a SCI/ FI Fantasy cross over, this led to many other series (this was one of the few sci fi series i ever read, i don’t like it much, The Otherland series is one of the few others i really love). in short that series kept me sane and opened a myriad of wonderful worlds.

So when i was offered the chance to read “The Heart of what was Lost”… well it was who do i need to sleep with moment? I simply had to get my hands on this book. That trip down memory lane, could the author keep the same voice from the series?

The story has a very intense dark fantasy norse flavour, with the cold and ice, the long march after the Norns. The Men mainly true Norsemen, men hardened to nature and fighting, now worn by the level of death and strangeness of the Norns, fighting now from a feeling of fear and revenge and a desperate desire to just go home.

The story follows that long slog north to the Norns ancient citadel, skirmishing all the way, with an inevitable clash at the end….. what holds the reader is the politics and schisms in both sides. The level of imagination for all parts of the world is there, i didn’t go back and read Memory Sorrow and Thorn,  but 26 years later all the magic is still there and i could feel the memory cells firing as Tad Williams carried me back to Osten Ard.

very Highly recommend this book… and if you have never read Memory Sorrow and Thorn, then do so…. it truly is up there with the greatest Fantasy Series.