After working in publishing and as an editor for Marvel Comics, Will Panzo found his true calling as a physician assistant for an emergency department. The Burning Isle is his first novel. He lives and works in New York City. 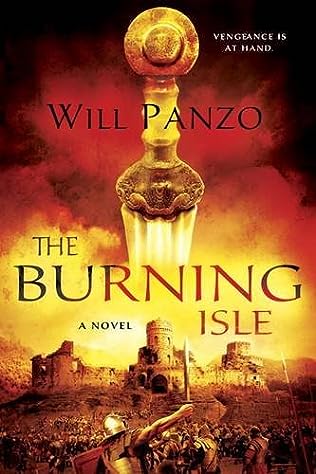 ABOUT THE BURNING ISLE:

The mage Cassius has just arrived on the island of Scipio. Five miles of slum on the edge of fifty miles of jungle, Scipio is a lawless haven for criminals, pirates, and exiles. The city is split in two, each half ruled by a corrupt feudal lord. Both of them answer to a mysterious general who lives deep in the jungle with his army, but they still constantly battle for power. If a man knows how to turn their discord to his advantage, he might also turn a profit…

But trained on the Isle of Twelve, Cassius is no ordinary spellcaster, and his goal is not simply money. This is a treacherous island where the native gods are restless and anything can happen…

Justice in the Absence of Law

Violence is the oldest tradition of justice known to man. Society, through the rule of law, offers other means of redress, but in exchange for this alternative, people must relinquish their right to violence. In a lawful world, society has a monopoly on the use of force. But a lawful world is a man-made concept and, like everything made by man, it’s impermanent. Violence has existed long before man though, and may well exist forever.

In today’s society, we take the rule of law for granted. Disputes which can’t be settled privately are brought before a court for arbitration. When a citizen’s life or property is endangered, the police, an instrument of the law, are a mere phone call away. But we need not look deep into history to find a society where law did not exist, or where it proved too ineffective to supplant the older tradition of violent retribution.

In ancient Greece, retribution was considered a noble act, one sanctioned by the gods. Rome had a rich tradition of blood feuds, which often pit warring families against one another for generations. Similar vendettas can be found in feudal Japan, the Philippines, medieval Scotland and Ireland, Norse cultures.

Even in America, only a few centuries past, settlers of the West found themselves in a frontier not yet touched by the institutions of government. Where, then, did they turn for protection and recompense? Without the framework of a lawful society, the settlers learned a lesson well known to the ancient world. The oldest form of justice is violence.

Blood feuds such as the Pleasant Valley War, the Lincoln County War (featuring Billy the Kid), and the Earp Vendetta Ride (an attempt to settle scores after the gunfight at the O.K. Corral) gave the Old West its reputation for violence. At that time, without an efficient system of law, or a government powerful enough to monopolize the use of force, people returned to a more primal system of justice. It would take decades before the rule of law took hold. The old traditions died hard.

My novel, The Burning Isle, is a dark tale, set in a fantasy world reminiscent of ancient Rome. On the fringe of this republic lies the island of Scipio, a place where the rule of law has lapsed. All manner of society’s castoffs make their way to Scipio: fugitives fleeing justice, exiles unwelcome elsewhere in the Republic, criminals seeking illicit profit. Into this world enters a young spellcaster named Cassius who, at first, appears to be a common mercenary looking to earn some coin. It soon becomes clear that Cassius has other plans though, that he has come to Scipio not to seek his fortune, but to right a great injustice.

Cassius fancies himself a man on a crusade, but on an island with no laws, vengeance is his only means of seeking justice. There are no courts in which he can plea his case, no police to arrest those who have wronged him, no jury to weigh the merits of his claim. Cassius, alone in a wild frontier, and beset on all sides by enemies, decides that violence is his only recourse.

As he sets about his work though, Cassius soon comes to realize that violence is a messy business. Vengeance is not a task undertaken flippantly. It demands dedication and self-sacrifice. When Cassius’ naïve morality meets his desire for retribution, the dissonance between the two threatens his very sanity. Can Cassius navigate the tricky path necessary to see his work completed without losing his mind? Or will his appeal to violence, that most primal form of justice, lead to his ruin? Only one thing is for certain. Before Cassius finds his answer, he’ll find bloodshed.

Filed under Fantasy, Will Panso