AJ Mackenzie: A Flight or Arrows

A.J. MacKenzie is the pseudonym of Marilyn Livingstone and Morgen Witzel, a collaborative Anglo-Canadian husband-and-wife duo. Between them they have written more than twenty non-fiction and academic titles, with specialisms including management, medieval economic history and medieval warfare. THE BODY ON THE DOORSTEP (2016) was their first novel. 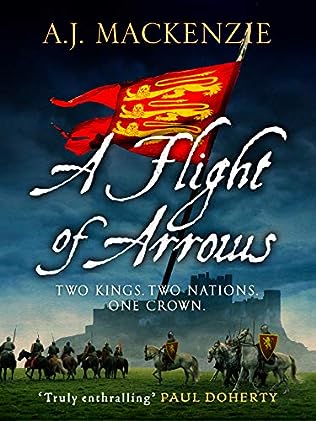 1328. After years of civil unrest between England and France, Charles IV dies, leaving no apparent heir. His closest heir to the throne is Edward III of England, but it passes instead to Charles’ cousin, Phillip, spurring both countries on to war.

1346. Landing at Normandy, Edward’s immense army makes inroads into French territory, burning everything in their path. But the mysterious assassination of an English knight reveals a terrible truth: there is a traitor in their midst. The king charges Simon Merrivale, the Prince of Wales’ herald, with solving the case.

As the army marches on towards its destiny, at the awesome scenes of the Battle of Crécy, Simon will uncover a conspiracy that goes to the heart of the warring nations. Among the ashes and the rubble, their fate will be decided: on the battlefield… and in the shadows.

A Flight of Arrows continues the magnificent year of releases from Canelo books who kindly sent me a copy to review. As a fan of both historical fiction and also archery it was a given that i would need to read this book, but also because i’m an archer there was a risk i could pull apart the books inaccuracies, i’m so glad to say i didn’t find any issues, and if there were any i missed it was because i was so utterly absorbed in the book.

At its core this book is a crime thriller, set amongst knights, men at arms, soldiers, archers and battles. Merrivale is the Herald of the prince, essentially an ambassador with the same protections, to attack and or kill him is an affront to Honour and God, which gives him a level of arrogance and assurance that is often amusing,  but its also a shield for his own fears and a front for the fact that he is so much more than he seems. There is so much touched on in the book about his past, and already before this series has hit its stride id love to read a prequel about his life.

In A Flight of Arrows Merrivale takes on the task of finding the murderer of a new Knight, the investigation soon uncovers much more, past crimes, and new treachery, theft, violence and old enmities. All the while following  and involving the reader in the life of the the army and its battles as the king looks to break out of a trap carefully laid for him, betrayal and murder dogs the army’s steps.

I had hoped for a good book, what i got was a great book, at just under 400 pages this is no light bed time read, but it is fast paced action packed and full of adventure, the characters are brilliantly drawn for the reader and so easy to become invested in. I went through the book at a frenetic pace and polished it off in a day, I just couldn’t put it down. Fantastic Historical Accuracy which it wears lightly to keep the pace fast and action packed.

Very highly recommend this book, one of the best reads this year so far, and a new author for my personal must read list (when a book is released).