Alex Rutherford is the pen name of Diana Preston and her husband Michael. Both studied at Oxford University reading History and English respectively. They are keen travellers and have now clocked up visits to over 140 of the world’s countries. 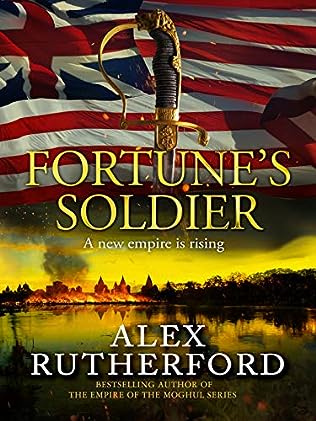 A new type of empire is rising

It is 1744, and Nicholas Ballantyne, a young Scotsman dreaming of a life as laird of his ancestral estate finds himself quite unexpectedly on the Winchester, a ship bound for Hindustan, seeking to begin a new life as a ‘writer’ on the rolls of the British East India Company. On board, he meets the spirited and mercurial Robert Clive, determined – at whatever cost – to make a fortune in a land of opportunity.

Over the years, their friendship sees many twists and turns as Clive’s restless hunger for wealth and power takes him from being a clerk to a commander in the Company forces, masterminding plans to snuff out rival French interests in Hindustan, and eventually leading his men to victory at Plassey – the prelude to nearly two centuries of foreign rule in Hindustan.

The last 2 months have seen me read 4 books from Canelo Books, and each time they have been some of the best reading of 2020. So when I was sent Fortune’s Soldier it went to the top of the reading pile.

Soldiers Fortune in some respects allows me to correct a failing going back 11 years, if I miss a publication date i tend to not have time to go back and read a book, so it gets consigned to my “One day hopefully, TBR pile”… this was the case with the whole Empire of the Moghul series, so This new book finally allows me to experience a book from Alex Rutherford, and i was not let down.

The book is linked by family to the Empire of the Moghul series, but stands on its own. We start in the now with the discovery of papers showing fragments of the life and history of Nicholas Ballantyne, his adventures in Hindustan with Robert Clive and their rise through the ranks of the East India Company. While Nicholas is fictional and used to show the times and action of the (Infamous??) Robert Clive, he is also used to show what may have been if a less corrupt regime/company had flourished, the culture seen from without, but by a person very much in tune and integrating with it, wanting to embrace it and be part of it, not riven by the greed of the average company man aloof from what they deemed a barbarian culture.

The story takes the reader through many battles, many courts and shows the perilous nature of the land and the time and how easily India could have become part of a French empire, also the fragility of life from disease and political maneuvers . I absolutely loved the book, the main characters are fantastically and sympathetically  portrayed especially my favorite character Tuchin Singh, Nicholas’s guide and friend through his time in Hiundustan. While this pair pull off some heroic feats the writer never strains the bounds of realism, setting the peril and the sounds smell and atmosphere beautifully and providing an action packed beautifully written adventure.